When Younis Khan breezed past Javed Miandad’s 22-year-old record to become the leading Test run-scorer for Pakistan, he barely raised his eyebrows, let along his bat.

It is a measure of the man that such an accomplishment did not result in five-fives, jubilant dancing or much outward acknowledgement. There was a job to do out in the middle, after all.

It was curious that in the moment when he breached the 8,832 landmark with a lofted six off Moeen Ali, unless my eyes deceived me, the ball landed near a flashing advertisement board for Bradford College, of all places.

The Yorkshire reference is a telling one given he was Yorkshire County Cricket Club’s overseas player for the 2007 season. Well, one of them anyhow…but more of that later.

Those with short memories might look at the back-to-back Championships of 2014 and 2015 and imagine thus it has always been so.

Yet after the Cheltenham & Gloucester Trophy triumph in 2002, the White Rose fans saw a hiatus in silverware that began to stretch out into the distance.

Whoever signed in 2007 as Yorkshire’s overseas pro had enormous boots to fill after Australian batsman Darren Lehmann had scored over 14,000 runs at an average of 68 in a seven-year stint.

Lehmann had helped shepherd the county to safety from relegation with a sublime 339 at Headingley in his last game of 2006 to leave quite a legacy.

A few months later, Yorkshire CCC chief executive Stewart Regan was announcing the signature of Younis Khan who would join the squad the following April.

The deal was only secured with additional financial help from ABDN, the Minority Ethnic Enterprise Network, a group established by Asian entrepreneurs.

English cricket fans had witnessed Khan’s brilliance in Yorkshire in 2006 when he crafted 173 in a losing cause for his country at Headingley but it was also hoped that Younis Khan in Yorkshire colours would help strengthen links with the Asian community.

It proved a solid, if not remarkable, effort in county cricket as he scored 824 runs in 13 matches at an average of 48.47.

The bulk of those runs came in several innings where Khan remained intractable from the crease and duly cashed in; 217 not out against Kent at Scarborough and a mean average of 308 over a Championship match at the Rose Bowl.

Yorkshire fan Tony Hutton recalls an element of feast or famine to the flow of Younis’ runs for the White Rose:

“I am afraid my memories of him relate to his involvement in a couple of dramatic collapses. First at Headingley when Sussex reduced Yorkshire to 26-5, he was lbw b Lewry for 1.

Also at Headingley in the Roses match when Lancashire had Yorkshire 1-3 and then 22-5 on the first morning when Younis Khan was bowled Mahmood for 0.”

If Khan’s presence at Headingley that year failed to spark the imagination quite as people had hoped, it was partially due to subsequent signings at the tail-end of the season having a bit of a shocker.

As well as playing in what was the Liverpool Victoria County Championship back then, Younis Khan turned out in limited-overs cricket (remember that yellow shirt with Bradford & Bingley as sponsor) in the days before bats were plastered with logos.

Khan played that county summer alongside current Yorkshire first-team coach Jason Gillespie (above) as overseas players but when the Pakistan batsman had to leave ahead of the ICC World Twenty20 in South Africa, Yorkshire replaced him with Inzamam-ul-Haq.

Yorkshire’s unfruitful association with Pakistan international cricketers continued with ‘Inzy’ failing to impress at the tender age of 37 before Pakistan-born leg-spinner Imran Tahir was drafted in for the penultimate game of the season.

Tahir took 0-141 down on the Sussex coast as the visitors were walloped by an innings. Let’s hope Adil Rashid’s recent unwanted bowling record on debut in the UAE doesn’t prove to be a one-match nightmare either because he can still be a match-winner.

There was meant to be a return to county cricket this season for Younis Khan with Yorkshire County Cricket Club. Yorkshire were perhaps mindful that lightening couldn’t possibly strike twice when it came to signing unsuccessful 37-year-old Pakistani Test batsmen.

In a funny way though, it did. Khan flip-flopped over his county deal after opting to tour Bangladesh with Pakistan instead, prompting an understandably terse response from Yorkshire who thought they had their man. 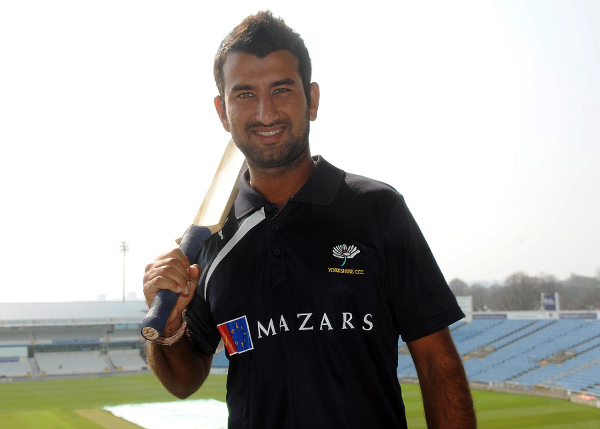 In the event, Yorkshire CCC moved quickly to sign Indian Test batsman Cheteshwar Pujara (pictured above) instead who proved a steady influence in the top order on those early-season English wickets.

So, Younis may have blotted his copybook somewhat but he remains a part of the county’s colourful past and will be remembered more fondly than the likes of Tahir or even Morne Morkel who, in 2008, had the misfortune to follow up his duck with the bat  with a torn hamstring and that was the end of his somewhat brief Yorkshire career.

Younis Khan believes he can continue playing a key role for Pakistan for a couple more years and has now set his sights on reaching 10,000 Test runs to join an elite band of just eleven cricketers that have blended enduring quality with fitness and longevity.

He now holds an armful of cricketing records for his country: most runs, catches, man-of-the-match awards, centuries and the highest average in Test cricket for Pakistan in an illustrious career that began at Rawalpindi against Sri Lanka on 26 February 2000.

Good luck to him…meanwhile, here’s a thought for Yorkshire’s 2016 overseas player… anyone for Shahid Afridi?