Recreational cricket across Yorkshire changes at quite a pace. While there are new formats and ways to access the game, there are many leagues that have bitten the dust down the years too.

John Phillips rummages through the county archives to learn about the Felixkirk and District League after the second world war.

It’s a poignant read with a nod to the impact of the harvest on cricket, the fluctuations in teams entering and leaving as any league will appreciate as well as the impact of loss of volunteers.

Sit back with a brew, put your feet up and learn about a Yorkshire cricket league from yesteryear. In some ways, a league’s challenges and its clubs in 2019 are not so different…

Felixkirk is a village just over 3 miles out of Thirsk on the A170. A farming community with a population that averaged around 100 for many years. The Felixkirk and District League was formed before the Second World War but no records remain.

The existence is confirmed by an informal meeting held at Felixkirk School, on 12 November 1945, to discuss the possible restart of the League in the summer of 1946. The clubs represented were Felixkirk, Thirlby, Sutton, Knayton, Silton, Kilburn, Upsall and Kirby Knowle. A further meeting was agreed for Monday 10 December and each club was to send 2 representatives.

At the December meeting, it was confirmed the League would start in May 1946. The fees were £1 per club although this varied between 10/- (50p) and £1 over the years.

Thirlby had returned the League Cup – they owned it after winning it 3 times – to be played for but no club could own it outright.

Kepwick also joined the League. The fixture cards were to be issued in April. The printing of the fixture books was the only expense for the League during the post-war years and the total cost rarely changed for 120 books at £6.

There were two rule changes for 1947:

As the years went on, it was decided that all matches were to be played on a Saturday and no midweek matches except by the consent of both clubs and the League Secretary. There was a discussion about the possibility of an Evening League, independent of the main League, but transport difficulties, prompt starts and the proximity of clubs were considered and the Evening League did not evolve.

Kirby Wiske joined in 1948 and the fees were increased to £1. There were concerns about Knayton leaving as the Secretary was requested to “urge Knayton to continue in the League.”

The following year the clubs agreed that matches in haytime could be brought forward to a weeknight if the clubs and Secretary agreed but no fixtures could be put back. The League introduced a Special Cricketers’ service on a Sunday afternoon in the Summer at Felixkirk Church. The League continued to prosper, and Northallerton Central Depot joined in 1950.

This was a departure from the usual members as this was a works team. The following year, South Kilvington and Thirsk Victoria joined but Kepwick withdrew and Knayton were undecided as to whether they would continue in the League.

The League were obviously still worried about harvesting as the fixtures in September should be arranged for Wednesday evenings if needed. They were also concerned by incorrect results/scores as it was decided that the final score should be agreed by both sides ON THE FIELD.

The League was not expanding, and it is difficult to see what they could do, as it was originally for villages based around Felixkirk and most of them were within five miles of the village. Although for the next few years the Secretary had his work cut out persuading clubs to stay or re-join the League.

The matches were based on no more than 4 hours of cricket starting at 2.30pm. The side batting first could bat no more than 2 hours and 5 minutes. Clubs were struggling to turn out full sides and the League allowed juniors to play more than 3 matches a season thereby scrapping a rule that had been in force for some years.

The League should be congratulated on their decision taken in 1954 when Mr Barker of Upsall CC asked if ladies might play in the League and it was felt that they should be allowed to do so. The shortage of players, female or male, resulted in an appeal to the Clubs in 1955 “to get boys interested so that they might take that place in the village XI in due course.”

The next three years saw the League struggle on as Northallerton and Bagley leave with Thornton-le-Moor and Topcliffe British Legion joining. The long-serving Secretary, Rev J R L’E King, was in poor health but continued in the post. In 1960, the League Secretary reported that he was leaving the district after many years and a new Secretary was required. Mr Norman Sadler was appointed.

Sadly, Rev J R L’E King died some months later and it became obvious that it was his enthusiasm that kept the League in existence before and after the second World War.

As the next three years passed, it was viewed with concern by clubs that villages were unable to field teams. The warning signs were there of the League going into cold storage. The number of clubs reduced until in 1964 there were 4 teams left – Upsall, Kilburn, Kilvington and Silton.

At the Annual General Meeting, Kilvington withdrew. It was decided to wait a year to see if other teams may wish to join. The Secretary noted that “None of us wanted to express but at the back of our minds I think we all felt it was the closing chapters of the League.”

The League was effectively finished but the officials held out hope and, in fact, did not close the bank account until 1975. The balance of £7.81 was handed to the Thirsk and Sowerby Flatts Preservation Trust for their use but with the proviso “that if at some future date the Felixkirk and District League again became active and required the money, this would be handed back.”

On reading the history, albeit through Annual General Meeting minutes, it was obvious that the enthusiasm of Rev King was the engine that drove the League. The history brings back memories of summers that everyone seems to remember were better than what they are now.

The problems the League encountered are the ones that Leagues and Clubs face today. They did not have the support of a structure such as the Yorkshire Cricket Board to help and advise them. Although they contacted the Yorkshire County Cricket Club, at the end of World War 2, I struggle to see what help and assistance they could give.

Finally, I can only thank Rev King and Norman Sadler for their efforts to run the league and the recording of the Minutes. 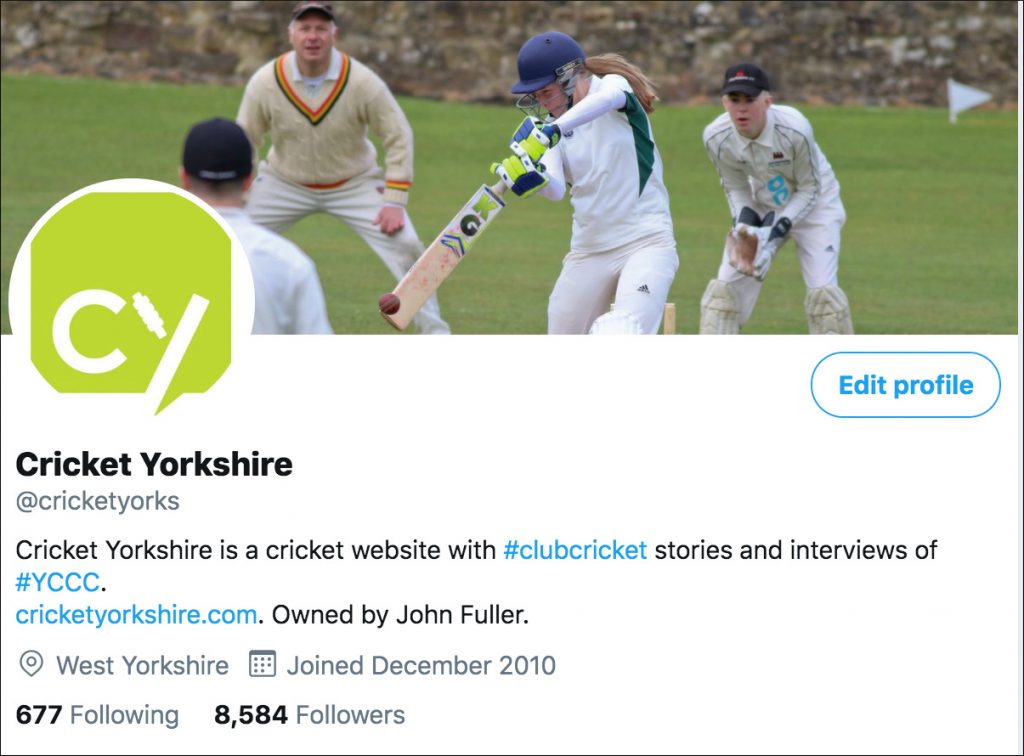 Have your say on social media

Thanks to John for that piece of cricketing history…can you recall other cricket leagues or teams around Yorkshire that are no longer active?

Tweet @cricketyorks or give your thoughts on lost leagues over on the Cricket Yorkshire Facebook page. Thanks for reading!