Ok everyone, December is here so talk of Christmas no longer feels premature. Even though the supermarkets have been flogging mince pies since the end of the county season.

Are you the type to leave Christmas shopping until the last minute then get on Amazon and click round in a state of near panic? Perhaps you buy months in advance and then watch the festive retail frenzy with a slither of a smile?

Either way, well done you for finding THE Christmas gift shortlist for those that want a bit of something more inventive than cricket bat cufflinks.

Cricket Yorkshire always does a Christmas article to highlight the unusual, daft and alternative from cricket cupcakes to a cricket pavilion birdbox and even a stumps-shaped toilet roll holder.

For 2015, we have combed the planet, rummaged under every shelf and shaken every giant conifer to bring you fresh ideas.

**These cricket gifts have been curated by Cricket Yorkshire and are purely an editorial selection based on a canal trip down the information superhighway.

‘A Test match worth of excitement in a Twenty20 timeframe, and best of all, the rain will never stop the action’ – is how they describe this board game and Cricket Monopoly has to be an overdue addition to your living room.

When the box arrived from Germany, this cricket edition of the famous game prompted childhood memories of wet weekends where family would hunker round the Monopoly board and I would buy up all the cheap properties and swiftly become bankrupt.

This cricket version licenced by Hasbro and sold by Australian entrepreneurs, Game of Throws, customises the game tokens so instead of the scottie dog or old hat, you can negotiate round as anything from the Ashes urn to an oversized cricket box.

Selecting the 22 grounds and stadiums must have been a challenge but Yorkshire CCC fans won’t be disappointed as Headingley obviously makes the cut though no space for sentimentality so Scarborough misses out!

Yorkshire’s Test ground is situated as the red property, Kentucky Avenue, from the original game, for Monopoly connoisseurs.

Chance and Community Chest cards have been replaced by Howzat and Third Umpire cards and instead of houses and hotels, you can dig into your pockets to pay for stands and media centres.

The game, first developed by Charles Darrow in 1933, has been customised and re-invented for decades and it’s a little surprising that it’s taken this long to see its integration with cricket.

Albeit for a more niche audience, there’s even scope down the line to devise an alternative, mischevious Cricket Monopoly with a nod to ICC misdemeanours, an Allen Stanford token and reference to Olympic cricket but good luck getting that one produced.

In an age of consoles, phablets and gaming through your telly, is there a place for Monopoly still? Absolutely. It’s inclusive, interactive entertainment away from a flickering screen that gets the grey cells firing. 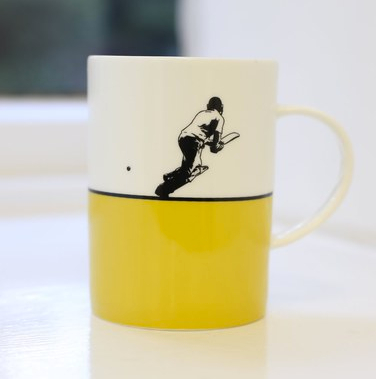 Jacky Al-Samarraie is a talented Yorkshire-based designer selling distinctive homeware from coasters to bone china mugs as well as postcards and greetings cards.

Her cricket-themed, fine bone china mug is always on the Cricket Yorkshire office desk and has done us proud for thousands of brews.

Jackie’s block colour with black outline style is instantly recognisable and the mug has twin images – a batsmen in his crease waiting to face a ball and a flick off his pads to leg.

Cricket and sport are only a tiny part of her range so do have a click round for inspiration or pop into her shop, The Art Rooms, at Salts Mill in Saltaire. 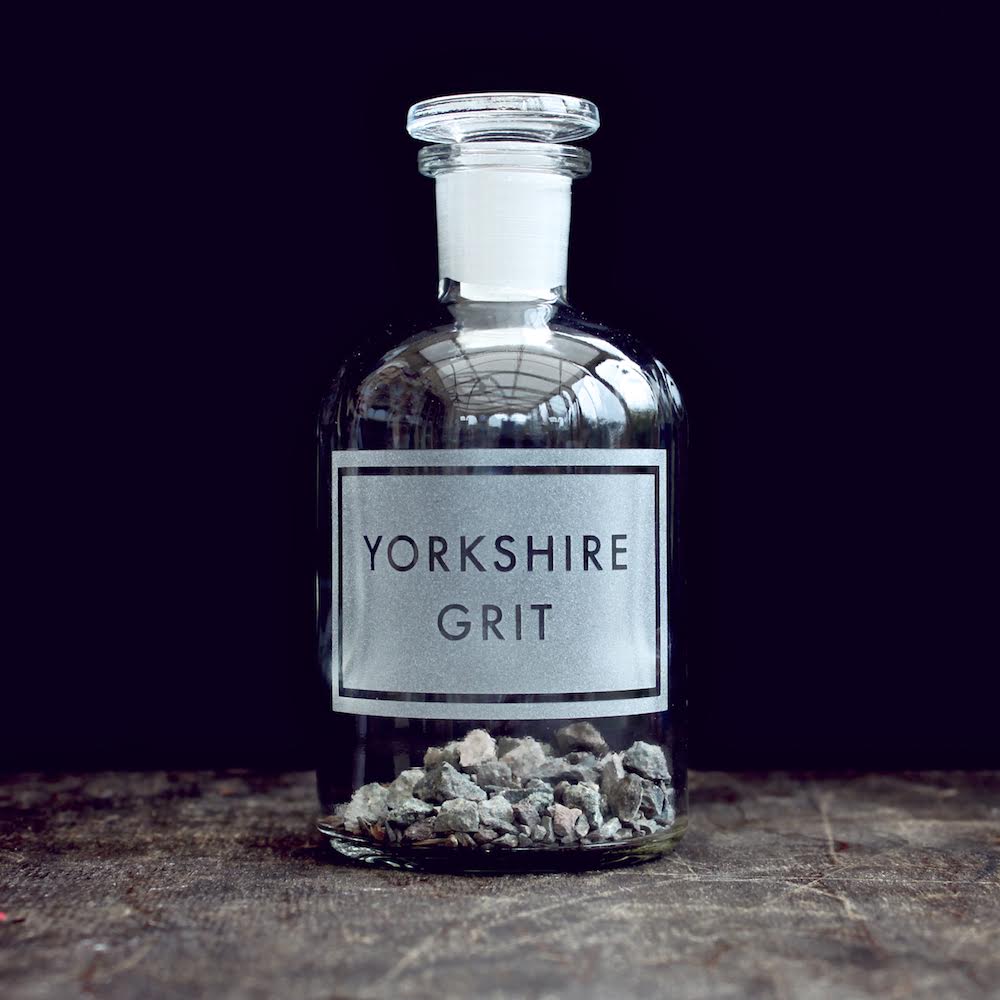 Andy Poplar’s ideas etched in glass are incredibly imaginative and from decanters to test tubes and pint glasses to jelly moulds, there is no end to his creative talents.

What does it have to do with cricket?

Well, we’re stretching here but there is symbolism everywhere if you seek it out (Yorkshire grit prevalent in the 2015 County Championship victory charge) and as a writer, what’s not to like? His ink bottle with ‘Stories yet to be written’ and ‘Lightbulb moment lamp’ are just a couple of personal favourites.

All items are etched to order with his turns of phrase so consider something hand-made and personal to someone who know. Catch Vinegar and Brown Paper on Facebook and the website is a balm for the eyes…

Depending on your Grinch factor, Gift cards might be perceived as uncreative presents but you only have to recall all those random gifts down the years you shipped onto Ebay on Boxing Day to realise they are actually incredibly thoughtful.

It means the person gets what they actually want – imagine that – and bypasses the prospect of having to smile/grimace at that ‘hilarious’ Christmas jumper.

Our website partner, Barrington Sports, are in the midst of a range of festive discounting and you can buy their gift cards online for any sport from as little as a fiver upwards. 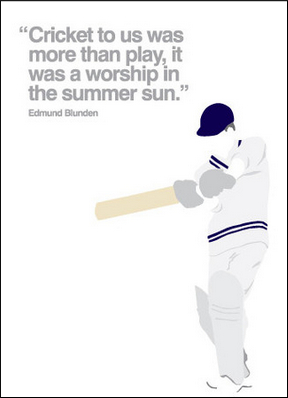 In a high-street shop in the spring, I stumbled across a set of greetings cards with sports silhouettes and a famous quote on each. They have stuck in the mind ever since and also gone out to various friends during the year.

The cricket card is a single design among many sports from bowls to football to rugby and fishing.

Ok, so no pics of a festive Santa reverse-sweeping into the Western Terrace at Headingley but think beyond Christmas and get a card that will linger in the house.

The Tyne-and-Wear company, My World, behind these designs have a website with flashes of humour sprinkled about; the fact that it’s currently snowing on their homepage suggests a light touch.

They do regional cards from across the UK, books and gifts so look them up online and see if they can solve a Christmas conundrum for you. 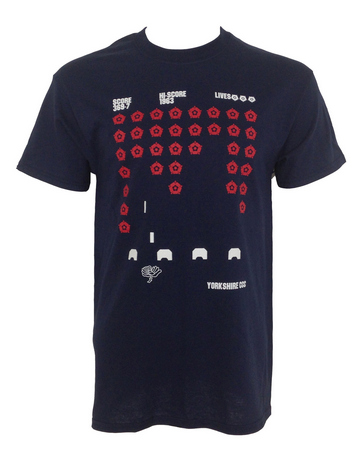 The versatile T-shirt is the office attire of choice here at Cricket Yorkshire while admitting to being exceptionally fussy.

Despite the office heater currently being on warp speed and draining the grid power from the whole of West Yorkshire, the notion of new T-shirts is never far from thought.

If Christmas present duties are hovering on your radar now, the Yorkshire County Cricket Club online shop is definitely one for county and international fans to check in on.

Choosing a T-shirt for someone can be a bit of a gamble but Yorkshire CCC’s T-shirt range including their current ‘2 for £20 offer’ (at the time of writing) covers most bases very well.

Their Mens Navy Space Invaders T-shirt depicting Yorkshire vs Lancashire caught the eye but you’ll have to be quick as certain sizes are selling out fast. 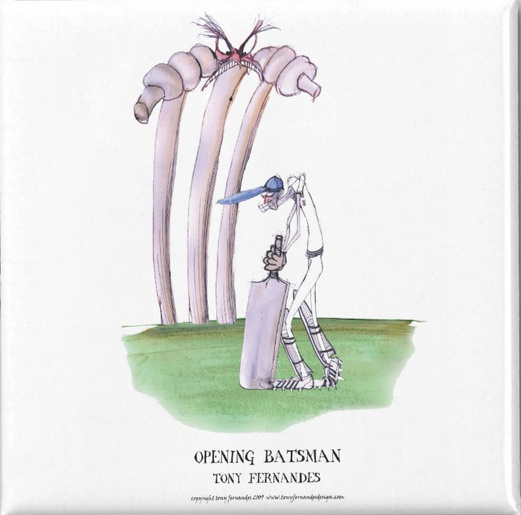 Over his distinguished career, Sheffield-based cartoonist Tony Fernandez can boast a client list that has included the queen and the President of the United States.

With cricket, Fernandez taps into the menacing intent that is wrapped in civility and pokes fun at it.

His cricket designs feature elastic, contorted characters including scenarios such as the batting collapse, bouncer and unorthodox spin bowler that can be bought and customised from ties to water bottles to t-shirts – all with an ability to personalise the gifts with messages to say whatever you want. 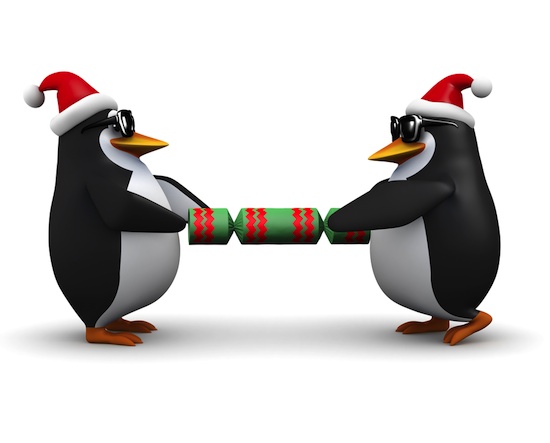 So, that’s seven ideas to help with the Christmas shopping if something ‘cricket’ is the mission.

Why not support local businesses and people you personally know as well as the global brands?

Best wishes from the Cricket Yorkshire HQ where the plan is to build a set of stumps out of mince pies and then eat the lot….