You are here: Home / Club cricket / What’s it like on cricket tour to Bulgaria? 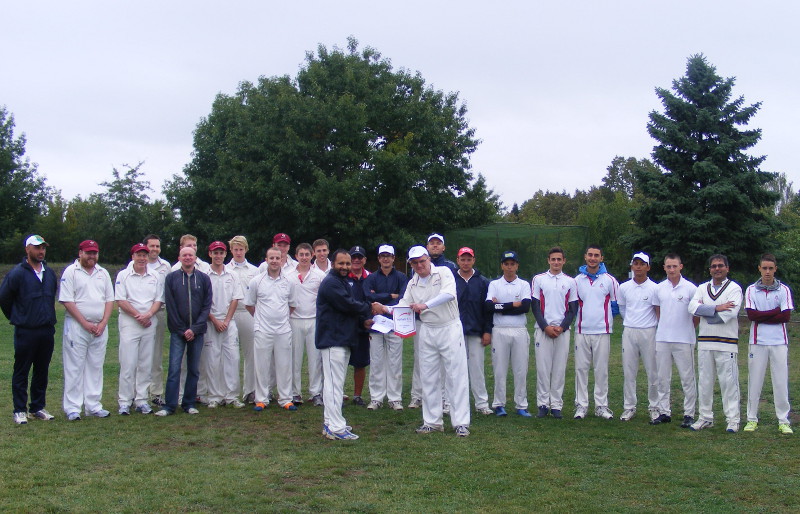 Martin Eede reveals how a small village in East Yorkshire embarked on their first-ever international tour to Bulgaria.

Yapham play against Bulgaria at cricket? It seemed improbable a year ago when my son, who had transferred to the British Embassy, got in touch.

As it happens, the ambassador, a keen cricket fan from the same cricket-mad grammar school in Kent, had asked if he could organise a team to come over from the UK to play some matches?

Conversations began with the Yapham team, where I coach now, around the art of the possible.

A few phone calls later revealed that it would be cheaper to fly to Bulgaria and stay in a four-star hotel than to tour in the south-east of England.

With enthusiasm building, the news of beer at 76p a pint might have been the clincher!

We embarked two weeks after our own league season finished with the tour party being a mixture of the Yapham club’s three sides and containing five qualified coaches.

The coaches were important as the Bulgarian Cricket Federation is encouraging cricket at all levels within the country and as part of the tour we would have a coaching day at the National Sports Academy as well as playing a Bulgarian representative side and the British Ambassadors XI.

That would leave one day for sightseeing in Sofia, the Bulgarian capital, before flying back to Manchester.

Bulgaria, an EU member, was a communist state until 21 years ago. It remains one of Europe’s poorest countries but is making enormous strides in catching up.

Some of the shopping centres were amongst the most modern seen, the infrastructure is being rebuilt and Sofia has a cosmopolitan air about it, particularly when strolling down the main shopping street, Vitosha Boulevard – it seems an exciting place to be!

It still retains many of the old communist buildings and monuments alongside some of Byzantine’s finest architecture and fascinating street markets such as the Women’s Market near the centre of the city.

As for cricket, Bulgaria was first introduced into the country by English diplomats in the early part of the twentieth century and played at the American college of Blagoevgrad in the south west of the country.

Under communism, cricket was suspended, deemed to be Western entertainment, but its rebirth began as a fledgling sport with the Bulgarian Cricket Foundation (BCF) created in 2002.

Since then, there has been investment and growth – demonstrated in the way the International Cricket Council (ICC) granted Bulgaria affiliate status in 2008.

The game has been introduced at Sofia’s university and is now being spread into some of the schools. 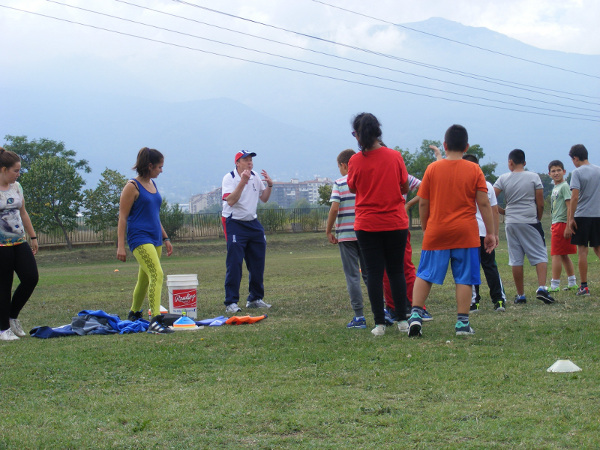 We agreed to take a coaching session with schoolchildren, and then with some of the better young players at Sofia’s National Sports Academy (NSA) before finally, as our trip coincided with the Balkan Women’s T20 tournament, to coach the national women’s’ teams from Bulgaria, FYRO Macedonia and Greece.

The coaching day in fact turned out to be one of the most fascinating with all our coaches and players involved in teaching players of varying standards from absolute beginners to those with some ability – with not everyone speaking English!

At the end of the session, we presented the eighty cricketers present with a cap and T-shirt, donated by the Yorkshire Cricket Board (YCB).

Sadly on the Saturday, the weather turned sour so that the game against the Bulgarian side was played in increasingly heavy rain.

For this particular match, the British accountancy firm, Deloittes, had re-laid the artificial wicket at the National Sports Academy.

Put into bat, the Yapham openers Jason Nattrass and Adam Smith at first struggled to adjust to the bounce on the artificial wicket.

Having made the adjustment both were soon in their stride with Adam Smith hitting a straight six off the captain of Bulgaria, Prakesh Missra. Something for the scrap-book!

Once the openers had departed, the run rate accelerated with Carl Brewer and Martin Pearson putting on a stand of 76 before Mikail Ivanov struck twice in one over. Yapham finished on 164-6 from a rain-shortened 25 overs. 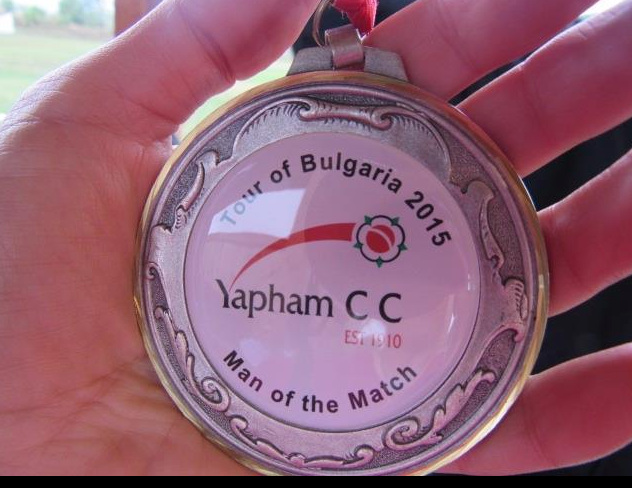 In reply, the watching Greek national coach praised the high standard of the Yapham fielding which kept constant pressure on the batsmen and with the Bulgarian innings subsiding to 96 all out, Yapham’s first ever game against an ICC country resulted in a win by 68 runs!

Unfortunately, the match against the British Ambassadors team was rained off as was the final of the Women’s T20 competition but this allowed an extra day exploring central Sofia.

It was a tour of many highlights but none greater than the invitation to the dinner to celebrate the Balkan Women’s championships.

If you’ve not sampled it before, Bulgarian food is delicious and the wine can be quite superb, however, what struck us was the speed with which everyone started the traditional dancing the moment the tables were cleared!

Cricket will grow in Bulgaria and I hope other Yorkshire clubs will take advantage of the opportunity to tour the country before it becomes ‘discovered’ and loses its uniqueness.

The standard is not high yet although increasingly Bulgarians who have travelled abroad and have played cricket are returning and helping spread cricket’s appeal.

My estimate is that the side we played against would be in the top division of the York Vale League whilst the women’s national sides would play competitively with the East Yorkshire girls U15 side.

Like many smaller cricket clubs, they have some good players and then an extended tail.

WOULD WE GO BACK?

We have already had an invite to return next year to coach and to play – as we have to Greece – and yes, I’m sure we will!

The enthusiasm matches that of anywhere I have played or coached, the hospitality was generous the four-star hotel was a far cry from the B&B’s stayed in on most cricket tours.

The Bulgarian Cricket Federation are very keen to encourage other clubs to tour and help cricket in Bulgaria expand so if you would like more information on the possibilities, drop me an email: [email protected].

Editor’s note: If you’ve been inspired by Martin’s article, have a click round the Bulgarian Cricket Federation website, or photos on the Facebook page for Bulgarian cricket. Bulgaria could be a tour destination for 2016; a chance to explore a new country and help spread the game in Europe.

Yapham CC are a club making significant strides. The village itself appears to have a population of about 200 and yet the cricket club runs three senior teams and six junior teams!