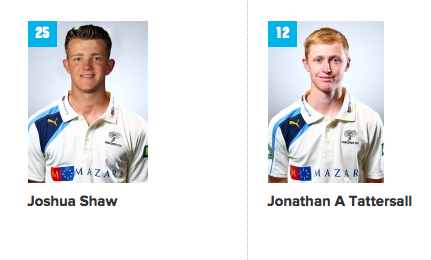 In a move aimed at supporting the cricketing talent at Yorkshire County Cricket Club, the Cricket Yorkshire website will be sponsoring two promising cricketers in Josh Shaw and Jonathan Tattersall for the 2015 season.

It’s the latest news in a series of partnerships and sponsorships, including a shirt deal with Leeds Bradford MCCU, aimed at showcasing Cricket Yorkshire to a wider audience and encouraging more to visit the website to have a read.

A part of the Yorkshire Academy’s cup and league-winning double last season, the seam bowler represented England U19s in 2014 where he snapped up a six-wicket haul against South Africa.

Cricket runs in the family as Josh is the son of ex-Yorkshire CCC seamer Chris, who played 61 first-class and 48 one-day matches, taking 181 wickets between 1984 and 1988.

Josh has played age-group cricket for the county at under 13s, under 14s, under 15s and under 17s level before representing Yorkshire Academy and second XIs in recent seasons.

Jonathan Tattersall is a batting allrounder who is quietly making a name for himself as an outstanding fielder with no less than current England coach, Paul Farbrace (when still at Yorkshire), saying Jonny was “probably one of the best fielders we have at the club.”

He has been substitute fielder for England’s Test team and is building a reputation at the top of order, scoring 176 runs from six matches at the Under 19s World Cup in the UAE in February, where England were third.

Like Josh, Jonny will be hoping he can persuade Jason Gillespie that he’s ready for first-team cricket for the White Rose.

The twenty-year-old from Harrogate is one of a number of names being touted to compete for a top-six spot in the early part of the season where Yorkshire miss the likes of Root, Ballance, Lyth and Bairstow on England duty in the West Indies.

Best of luck to both with their cricket; may runs and wickets flow and the chance comes to wear the famous Yorkshire shirt.