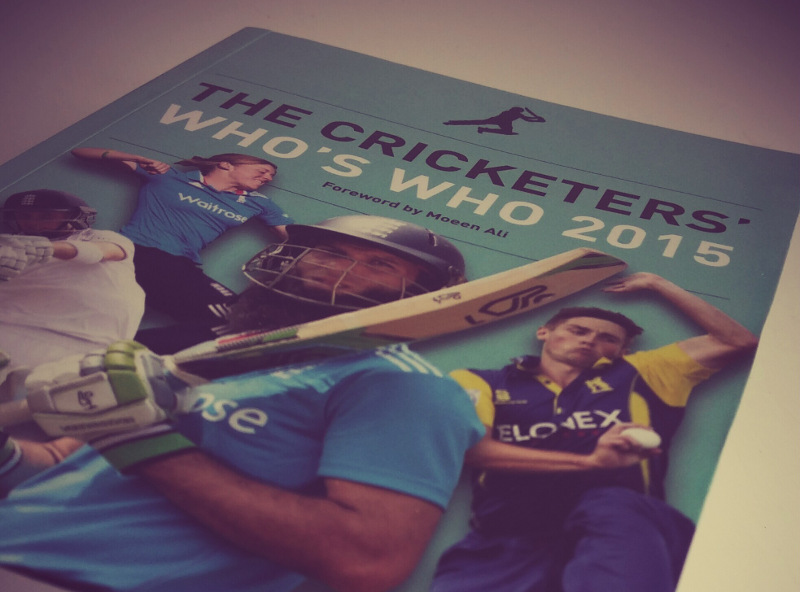 The Cricket Yorkshire office had a cricket book thump onto the doormat in time for the 2015 county season.

It has a mint cover (in colour and condition) with Joe Root teeing off while Moeen Ali, who writes the foreword, clutches his Kookaburra and looks into the readers’ eyes.

The Cricketers’ Who’s Who’s, published by All Out Cricket, is new to me being that I don’t tend to thumb through a book for stats or facts but turn to my online friends, Mr Google, Mrs Cricket Archive and Miss Cricinfo.

Having asked to review this, one of the first things to strike me flicking through was Jason Gillespie’s article – Through the Looking Glass – which (in light of his shortlisting for the England Coach role) reads as a refreshing blueprint.

Issues such as returning T20 to a short block later in summer chimed here with the risk of rain shrugged off: ‘You can’t base all of your decisions on something you can’t control.”

The chances are that you either buy this book already each year to act as your guide to the season or this will be the first you’ve heard of it.

This is a chunky companion for your cricketing journey but not the kind of tome that gives you back ache and is better used as a doorstop back at home.

Each county has a profile as well as there being all the averages across competitions that you’d expect before we get to the good stuff: the individual player profiles.

Whether it’s a screaming hot day and you are stretched out watching your county amble along at stately three runs an over or it’s raining, you’re sheltering indoors and you’re in need of entertainment, the Who’s Who can cater for all.

IMMACULATE HAIR AND JUGGLING FIRE (NOT AT THE SAME TIME)

Moin Ashraf is the first Yorkshire cricketer to be listed and we learn he’d revisit the LBW rule so that if it’s hitting the wickets, it’s out regardless of where the ball pitches (with you there, Moin).

That the Bradford speedster also takes an hour to do his hair in the morning is not the most surprising fact you’ll learn in this book as whenever I’ve seen him, bowling or around Headingley, he’s rarely got a hair out of place.

Seriously, the things you learn from this publication will blow your mind.

Did you realise Dan Hodgson can juggle fire? One way to put off the batsman in his delivery stride….

Jack Brooks chose his middle name, Adil Rashid (next to Worcestershire’s Aadil Rashid) would have been a taxi driver if not a cricketer and Jonny Tattersall’s nickname is boneman.

Does this draw the reader closer to the cricketers? Do we believe anything in this book?

It’s not a cover-to-cover, John Grisham pageturner but whatever your interest in any player for the 18 first-class counties then you have a pocket database to flick through and look up your own or opposition players at will.

There are player profile absences – presumably when the player was unavailable or in the case of international players, whizzing round the globe – but you still get a career overview.

As reference books go, the Cricketers’ Who’s Who is a champion worth your consideration. In its 37th edition, the titbits and hints of colour peek out from many pages.

It’s also mildly addictive. Did you know Alex Lees does a bit of magic when not racking up the runs for Yorkshire County Cricket Club? You did, huh. Fair play.

Ok, ok…I’ll stop now and let you go and buy the book….but seriously, did you know….?

PS: Don’t worry, your copy won’t come with a frayed corner or bleached out lack of colour, we’re sooooo retro on occasion here at CY…