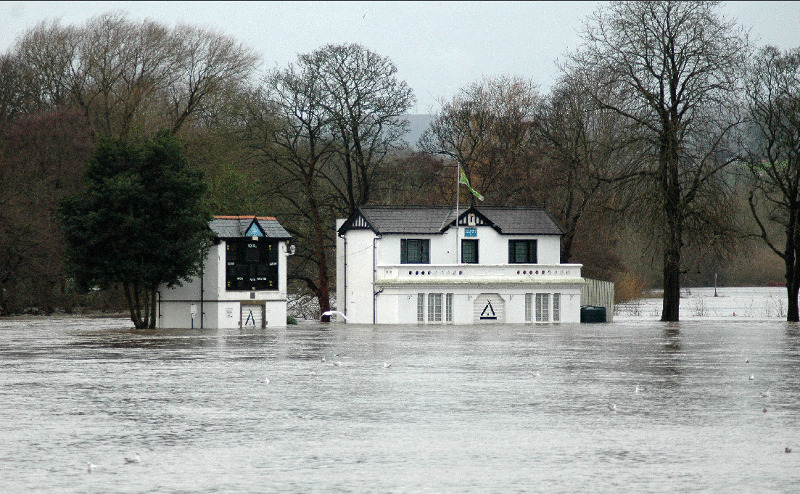 There is nothing more likely to chill the blood of those involved at cricket clubs than the imminent threat of flooding.

The devastation caused by the floods of 2015 is still being felt today. As Storm Angus battered the country this week with severe gales and heavy rain, there was the reminder that this could be another difficult winter.

Each club was visited and assessed with funding from the ECB and Yorkshire Cricket Floods Appeal adding to the expertise offered to begin the onerous task of repairing and rebuilding.

@CopleyCC this is the current state of flooding at the club. Copley Calderdale. pic.twitter.com/mkO4PqCaVX

Time tends to blur our memories which is where the unbelievable photos and video taken across the county in December and January jolts us into a double-take.

We live in an age of hyperbole. The longest, fastest, oldest, heaviest comparisons are trotted out with such frequency that it’s hard not to be cynical but last winter was worse than any Hollywood disaster blockbuster. No exaggeration required.

On Boxing Day, Mrs Cricket Yorkshire and I began a walk along the River Aire; a route we’d taken many times but were pulled up short, open-mouthed, at the way the river had burst its banks and swallowed huge swathes of land.

Walkers milled about, shocked at scenes some we talked to had never witnessed in their lifetime. We are not complete novices to freak weather in this country but Storms Desmond and Eva flooded 16,000 homes in December alone. 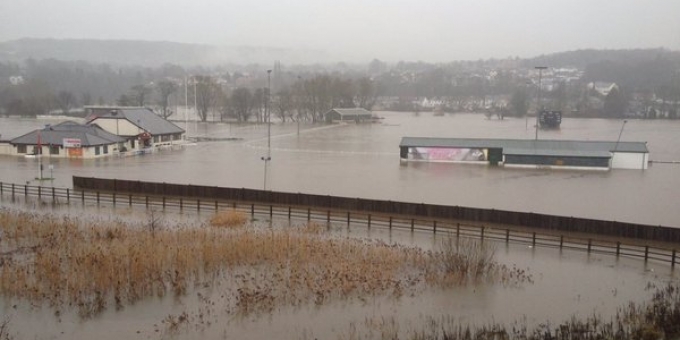 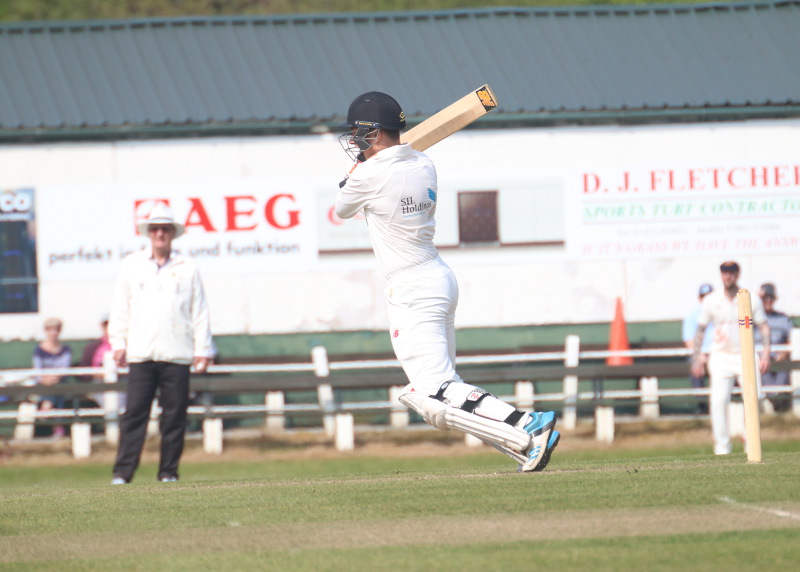 I visited Bradford & Bingley Cricket Club this summer on a scorching summer’s day where the firsts were at home to Cleckheaton in the Bradford Premier League.

The Wagon Lane deck still had some life in it; a miracle considering the whole complex had previously been submerged with extensive damage to the grounds, equipment and machinery.

The indoor nets were off limits as everything was ripped out and binned. 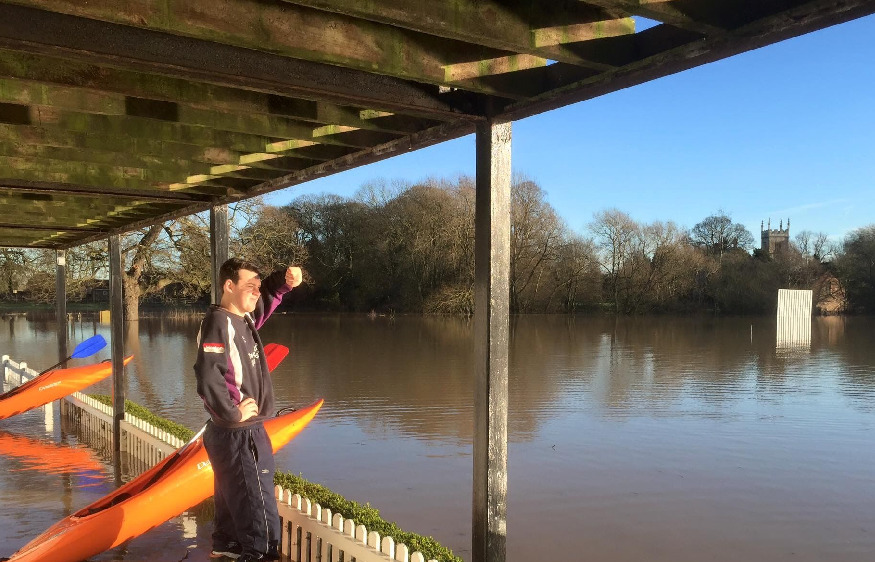 Bolton Percy is a tiny North Yorkshire village, a few miles east of Tadcaster and their cricket club play in the York & District Senior League.

The area caught the national headlines when Tadcaster bridge collapsed under pressure from the swollen waters of the River Wharfe and residents were evacuated.

Bolton Percy CC are familiar with water on the pitch; it had crept up to the doorsteps the winter before but the decision to close a sluice gate to protect the village meant metres of floodwater turned their pavilion into an isolated island surrounded on all sides.

For club secretary Bill Preacher, the memories of the floods invoke a shudder at what was ruined just several years after their HQ had been expanded and completely redecorated: “Everything was knackered. Like all old buildings, it’s not exactly level so it was up to fifteen inches in places. The fridges had been swimming in water.”

Nonetheless, amongst the now-useless machinery, a few trusty faithfuls refused to give up.

As Bill tells it, once the waters had receded, the things that are ancient like the roller “which dates back to Noah’s Ark” miraculously started first time.

At times like these, clubs needs their volunteers to step up and (literally) wade in. Repairs take many months and then there’s the headache of insurance, what’s covered or not in the fine print and how to make up any shortfall.

There were no sudden rampant torrents at Bolton Percy; the water eerily rose up and then gradually sank back down but damage from standing water was plentiful with their outdoor nets one of the casualties.

As the water disappeared, trees that had been ripped up and deposited were revealed on the cricket square and outfield. Little bits of bark were still being plucked out of the ground the following September by the groundsman. 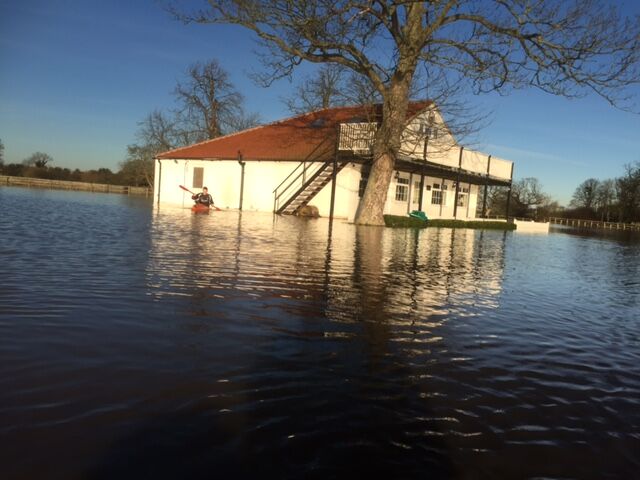 In Bolton Percy’s case, the insurance payout was appreciatively speedy but as a rural club, they hadn’t managed to afford cover for the outdoor nets so the Yorkshire Cricket Floods Appeal stumped up a sizeable grant to replace them.

Are they better prepared for another flood? Well, lessons have been learnt around storing machinery out of the clutches of nature but there are no cast-iron failsafes as with Bill’s verdict: “Unless we knock down the pavilion and start again, the water will get in.”

If that future prognosis sounds too gloomy, the club has bounced back from adversity and out in the middle, their first eleven avoided relegation from Division One of the York Senior League with the last game of the 2016 season.

Fundraising was appreciatively up as the community rallied and if there is positivity to be gleaned from something like this then thanks to the generosity of many, Bolton Percy Cricket Club’s facilities are now better than ever before.

The list of Yorkshire cricket clubs that were struck by the 2015 floods was indicative of the might of Yorkshire’s river system fuelled by unprecedented rainfall.

Calder, Aire, Wharfe and Ure all rose up in unison. 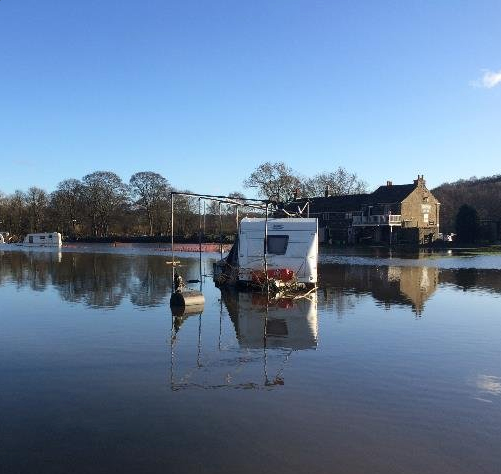 Meanwhile, a year on, the incredulity in David Young’s voice, treasurer at Tong Park Esholt Cricket Club, was palpable: “We had debris all over the field, it took six weeks for the water to recede. It was just horrendous…like nothing we’d ever seen.”

The River Aire swallowed up the cricket and football fields as well as the caravan and camping park.

Eight residents needed rescuing by West Yorkshire Fire and Rescue in a boat, though the cricket club President Bob Wilkinson chose to stay inside the clubhouse, where he lives in a connecting flat.

By the second week of January, there were still three caravans in situ that had been picked up by the currents like rubber ducks and tossed onto the Tong Park Esholt outfield.

Young was keen to highlight the assistance of the England & Wales Cricket Board, particularly Dan Musson in their Facilities Team, without whose support he believes Tong Park Esholt CC would no longer exist.

What David noticed was the way the cricket club pulled together to get things back on the right track though even now, their ground is still not ready to play on, with June or July – some eighteen months after the event – the goal for cricket’s return.

The square and outfield needed relaying while five feet of standing water in the changing rooms necessitated a refit with the total bill estimated at £150,000.

During the recent Storm Angus, David Young was anxiously rooted to his hourly flood alerts and painted a stark picture post-2015: “We’re under no illusion. If we have it that bad again, I don’t think we’ll be able to continue as we’ll no longer get insurance. It’s always there hanging over you.”

They could at least count their blessings by virtue of the fact of having two cricket grounds – Esholt was put out of action but Tong Park thankfully escaped attention so that’s where the firsts and seconds used, while the thirds hired Shipley Providence’s Salts ground.

Emergency funding was sought from the Yorkshire Cricket Board and Sport England with the latter awarding a £25,000 grant that is yet to hit the bank account and is dependant on Bradford Council renewing the ground’s lease.

In a striking act of generosity, the members of Tong Park Esholt Cricket Club have put their hands in their pockets to loan the thousands of pounds for repairs to speed up the recovery process.

Freshly decorated clubhouse, new square being re-laid…things are looking up for #TPE after an interesting year #UTT #cricket #floods pic.twitter.com/CllsLVLMNw

Once finished, Tong Park Esholt CC will have an all singing all dancing drainage system, a relaid cricket square and brand-new practice facilities.

They’d rather the horror of the floods never happened but the money has been found and something good will come out of all of this destruction.

Collective, dogged community endeavour got countless cricket clubs through a grim time with the floods.

They’ve been through enough and let’s all keep our fingers crossed that the weather is less spiteful for all of us this winter.