The first sign that Yorkshire County Cricket Club won’t have it all their own way in 2016 emerged in the United Arab emirates when the MCC defeated them by four wickets.

The loss was a rarity in four-day cricket for the White Rose county who were only defeated once in 2015 and once in 2014 in the first-class arena.

Is this the start of a decline? Should we be worried? No, perversely it was the ideal start to the season – end result notwithstanding.

The tough tussle with an experienced MCC outfit – captained by Ian Bell and hosting a clutch of former and current England internationals such as Samit Patel and Graham Onions – will have been just what Andrew Gale’s side wanted.

From here, Yorkshire head to the 3aaa County Ground – that’s Derbyshire to you and I – for a two-day friendly before their first home game of 2016 at Headingley on Monday 11 April against Leeds Bradford MCCU – and they’ll be quietly confident with good reason.

Mark it in your diaries and come along. Sunday 17 April is the opening day of the Specsavers County Championship for Yorkshire who are at home to Hampshire.

Can they achieve their own remarkable piece of history with a third County Championship title on the bounce?   Well, it won’t be a breeze for any number of reasons.

The expected shifting sands of availability for international duty cause headaches annually and a look at the strength of opposition shows how certain counties are well placed for their own Championship challenge.

However…this is why Yorkshire have the upper hand:

England players could play for their counties in the early rounds

Joe Root in a Yorkshire CCC shirt is a bit of a collector’s item in the last few years. He plays all formats for England and clocks up the air miles for his country so is understandably usually wrapped in cotton wool by the ECB.

With the first Test of the summer at Headingley against Sri Lanka in late May, England’s cricketers could well be available in order for them to gain game-time and this will benefit Yorkshire more than any other county.

Imagine Joe Root, Liam Plunkett, Jonny Bairstow and Adil Rashid all being free to turn out…  a Yorkshire XI could read like this:

You’ll notice Tim Bresnan’s absence (he tore his calf muscle and is out for at least the first six weeks of the season) but even so, it’s not getting too carried away to say that particular Yorkshire eleven – boasting seven current or former internationals – could give the England Test squad a decent game. 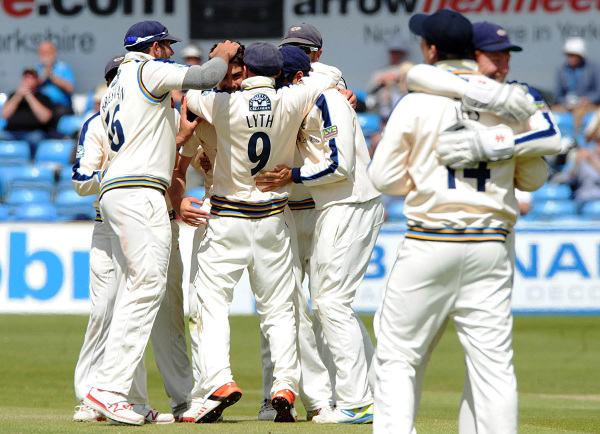 Assuming any of Root, Bairstow, Rashid and Plunkett are called up for Test cricket, that’s a crushing blow, surely?

True, but Yorkshire County Cricket Club will have returning players Lyth and Ballance to add runs and nous.

Beyond the England Test cricketers, there is competition for places everywhere. Steve Patterson is as reliable as they come, Will Rhodes’ fledgling four-day career is heading in the right direction while David Willey will want to play all formats and would bolster the batting.

Jack Leaning is bedding into the middle order after a rocky patch as opener, Andrew Hodd is an excellent deputy with the gloves and Karl Carver enhanced his reputation on the UAE tour as an offspinner beyond his years.

Second XI capped players such as Ben Coad, Matthew Fisher and Ryan Gibson all want to kick on with their careers with Fisher already having shown glimpses of his exciting potential with Yorkshire Vikings.

Wicketkeeping may present a problem if injuries conspire against Yorkshire although Yorkshire Academy wicketkeeper Jonathan Read must be highly rated based on his inclusion for the senior squad for the first time in the UAE.

A word about who the title contenders will likely be in Division One – the last season before the competition gets cut to fourteen matches.

This is egg-in-face territory as sometimes a county defies any predictions and surpasses expectations, it’s how sport captivates us all – not even the most fervent Leicester City fans could have imagined being king of the castle in the Premiership.

As for Yorkshire’s rivals for the Specsavers County Championship? Here goes…

Obviously, the Championship will be won and lost in the absence of any England internationals but Durham have so much experience to call upon with county professionals like Collingwood and Mustard but will their batting stand up?

Like Yorkshire, Warwickshire have a number of England internationals who are returning to county duty. Ian Bell captains while Jonathan Trott and Chris Woakes are assets to call upon.

All rounders Keith Barker and Rikki Clarke offer ballast with bat and ball while New Zealand spinner Jeetan Patel is available all season.

The squad based at Lord’s were a distant second to Yorkshire in 2015 but have plenty of talented cricketers from Eoin Morgan to Sam Robson and packed with seam bowling.

How much will Nick Compton and Steven Finn be available? Adam Voges and Mitchell McClenaghan are their overseas picks with the former a seasoned county pro.

They always get mentioned and deservedly so. Hales, Read, Wessels, Patel, Gurney, Lumb, Taylor are some but not all of the cogs in the machine at Trent Bridge.

Australia’s Jackson Bird will hit the deck hard, should be a right handful in English conditions and arrives off the back of some strong performances for Tasmania in state cricket.

To be fair, Division One looks very hard to call in 2016. Newly-promoted Surrey have the Curran brothers, Dernbach, Roy and some bloke called Sangakkara. Their recruitment of Mark Footitt is a canny bit of transfer business so they may be the dark horse.

So, that’s the serious business of peering through the office tea leaves in search of cricketing truth. Time will tell if I get it hopelessly wrong and Somerset or Lancashire win at a canter.

So, a close call to make but never mind…BECAUSE COUNTY CRICKET IS NEARLY BACK!

We say this every year but it really does look like a very tough Division One in 2016. The promoted teams – Surrey and Lancashire – are not instant relegation favourites necessarily though how they adapt to the noticeable step up in quality will be key.

As for Yorkshire? History beckons but to achieve it, they will have to go above and beyond everything they’ve done before. They have the squad, experience and temperament – let battle commence!