You are here: Home / Cricket Features / Going, going on! What’s a cricket memorabilia auction like? 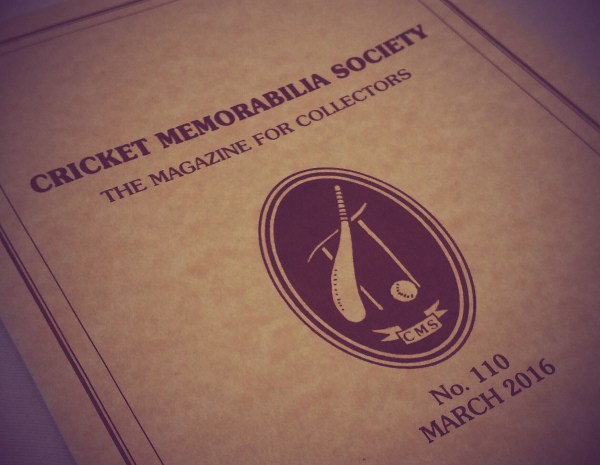 The journey over to Lancashire County Cricket Club for my first-ever cricket memorabilia auction is spent in the back of a car, listening to seasoned collectors Brian and Bob swap anecdotes.

On the outskirts of Manchester, we pass through Swinton and, paused at a set of traffic lights, my eye is drawn to a bloke with a fearsome beard who jogs by.

The runner is notable given it’s a bitterly cold morning but he has foregone the standard attire in favour of the bare-chested approach. Well, it takes all sorts.

We park up outside The Point at Emirates Old Trafford. That’s neither a football scoreline nor a polite request to jab your finger but the actual name for the £12m conference and event venue that is hosting today’s cricketing version of Flog It!

The Point divides opinion in terms of artistic and architectural opinion, much in the same way the Headingley Carnegie Pavilion does back in Yorkshire. It appears as if an old-fashioned computer hard drive a shade of deep red has been plonked on one edge of the Old Trafford pitch. I like it quite a bit actually.

Inside, there is a hive of activity as the lots for today’s auction, organised by the Cricket Memorabilia Society (CMS), are set up numerically down one long line of tables. 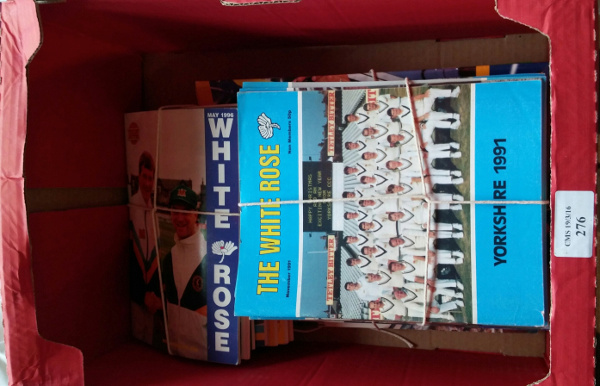 There are all manner of items including signed miniature cricket bats, paintings, prints, scorecards, team photos and books.

If you wanted the Surrey vs Yorkshire scorecard from 1965 for the Gillette Cup final at Lord’s that year, this was the place to be.

In fact, there was plenty to interest those of a White Rose persuasion such as the 30 signed cards of Yorkshire CCC Test players: everyone from Naveed Rana to Younis Khan to Kane Williamson with an estimate of £25-30.

It quickly became apparent that many attendees know each other well from doing these quarterly meetings which included ex-Yorkshire batsman (and new YCCC President-elect) John Hampshire, who was at their AGM at Derbyshire CCC last year.

Those that bid here – I wasn’t permitted, to the relief of Mrs Cricket Yorkshire no doubt, because I’m not a member of the Society – are a mix of private collectors and a smattering of those who do it for a living, building their collections for sale online or in person – like William Roberts who is a regular in the Long Room at Headingley.

Pre-auction entertainment came in the form of ex-England, Lancashire and Surrey legspinner Chris Schofield who popped along to sign autographs. There was also the prospect of Lancashire hotpot at lunch (the red cabbage was politely turned down, for the record because cabbage has no place in the world) and a slab of cheesecake that was shamelessly wolfed. 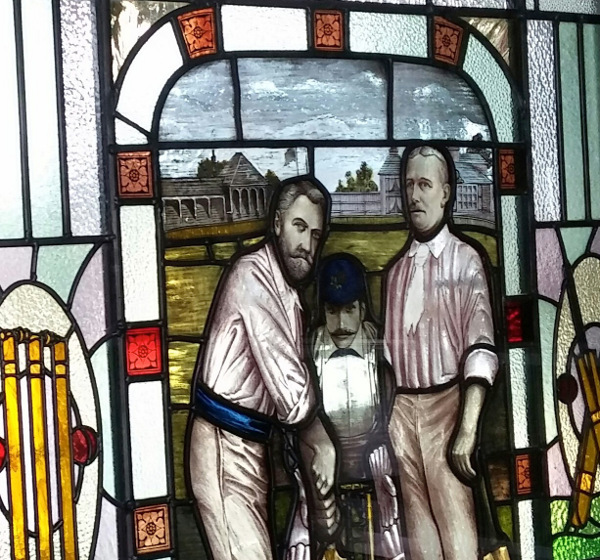 The window was gifted to Barlow in his 1886 benefit year and after years of research, Hayhurst tracked it down and was ultimately the architect behind its repatriation back to Lancashire County Cricket Club.

It was an engaging and skilfully told tale and a perfect illustration of how an object, perfectly appealing in its right, is gifted an extra dimension through the human connections that surround it.

A lesser known fact for you. Barlow, depicted in the painting with trademark forward defensive, is batting left-handed when in truth he was right-handed but the builders put it in the wrong way round when it was moved!

Anyhow, back at the auction, we take our seats and things get underway. What’s it like to bid at an auction?

Well, as you’ll know from TV, it’s not rocket science, you register, get allocated a number and wave it about in a frenzy to outbid those in the room, anyone on the phone or internet or if there’s a reserve price it can’t go for less than.

One gentleman got a bit ahead of himself and won the first item but was suitably bashful when asked to hold up his number and had to admit he hadn’t got one!

But blips aside, the hundreds of lots under the hammer whistled by in a couple of hours with my travelling companion, Brian, winning all his bids for less than the budget he’d been allocated – as he was bidding on behalf of someone who couldn’t make it.

There were no crazy, deadlocked auction battles where steely-eyed bidders go head-to-head and any notion of a sensible price disappears because I MUST HAVE IT is the only thought. No-one snapped up the Fred Trueman cartoon for £1.5 trillion.

More’s the pity, it has to be said, as The Memorabilia Society (which only charges a very reasonable 7% commission) finds itself under pressure to raise revenue as membership falters with the added context of continually sourcing enough quality items that collectively will go for significant sums.

In truth, many items either didn’t sell or went for less than their estimate with the auctioneer, rattling through the roster with a quiet rap of the gavel, wiling to compromise to find the memorabilia a new home.

As is the nature of auctioneering, some of the more unusual, coveted bids made plenty more than the estimate but, by and large, the majority of the items were between £5 and £50.

When all said and done, it was a very enjoyable and well organised afternoon – I’d never been to an auction before – and it was fascinating to see what was deemed valuable in the eyes of those far more experienced than I.

A collection of thimbles was more expensive on the day than an autograph of Don Bradman, which surprised me, but it’s down to that combination of rarity and those who happen to be bidding and what they’re looking for.

If you want to know more about joining The Memorabilia Society, visit: http://www.cricketmemorabilia.org