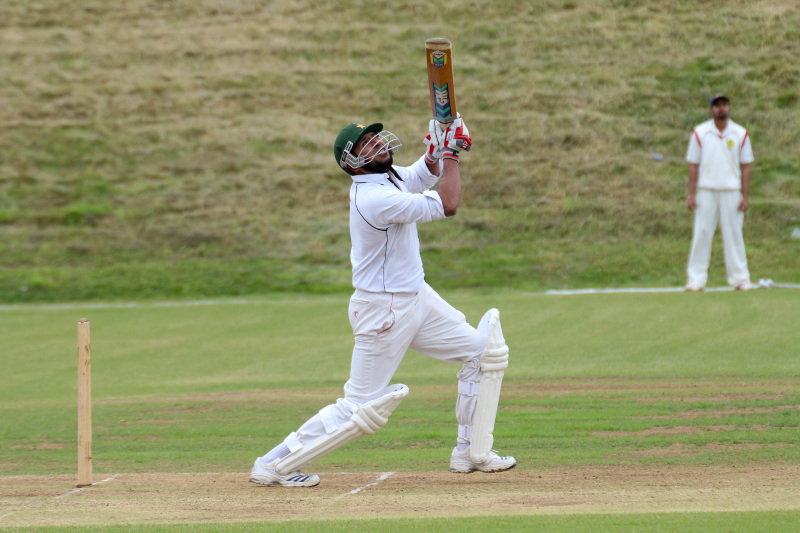 What began as a trip to see taxi drivers play an informal game in Bradford transformed itself into something else entirely.

From Forster Square, the walk up to Karmand Cricket Club on Barkerend Road was comfortably longer than anticipated and all uphill for this unfit cricket journalist.

The steep climb takes you past Bradford Cathedral and onwards and upwards with a short pitstop to chug a drink and reposition camera equipment which could well be a 400mm lens digging into my third vertebrae.

Passing through on foot, it’s possible to get a sense of a place and Barkerend looks to be a part of the city that is particularly run down with a quick Google revealing some fairly disturbing headlines in the local news.

The old Barkerend Mills building off to the right in the distance looms into view; deserted and derelict but hinting at past glories when it was a steam-powered spinning mill in the 1800’s.

Cars fizz in all directions, sound systems blaring, darkened windows and a growling V8 fires at the turn of the lights.

A young lad strains to cross the lights, chastised by his mother who reminds him and me, as we all move after sighting the green man, that most accidents happen near home.

The Karmand Centre and the cricket club at the back are definite success stories here in Bradford East.

The community building offers diverse events with everything from pre-school to boxing to driving theory classes and today looks like it’s having running repairs done with workmen in overalls swarming over the place. 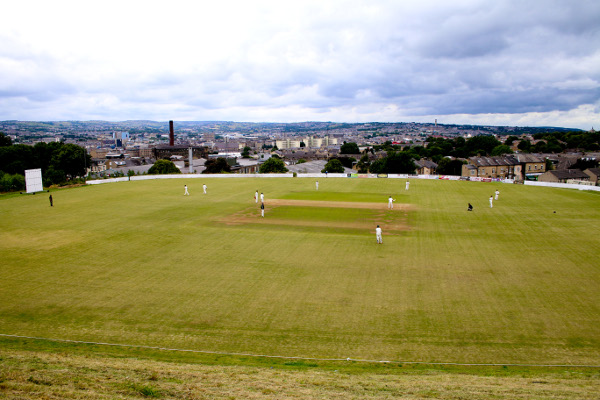 The cricket ground holds a striking view across the urban sprawl of Bradford; it took years to come to fruition as a community project and over a cool million needed to be found but it’s been holding cricket for all ages ever since.

The incredibly steep grassy bank on the left is a brilliant vantage point to watch the game but fair warning, when the wind blows in the wrong direction, a smell wafts over the ground from the local abbertoire that is nothing short of brutal.

I had heard a whisper of a story a few years ago that had got the antennae twitching; that Leeds taxi drivers play in the middle of the night after they come off their shift.

Talking to taxi drivers this summer in both Bradford and Leeds, they scoffed at the notion of doing anything other than heading straight home and getting some shuteye after exhausting stints behind the wheel but it nagged away as something to follow up on.

Thanks to Nasa Hussain, ex-Chairman at Undercliffe, groundsman at Karmand and Park Avenue and generally plugged into all things cricket in the area, I was told about this lunchtime fixture and turn out to watch today.

Apparently, some taxi drivers used to play in Soldiers Field in Roundhay Park on the outskirts of Leeds but today is all about two guys who have put together teams; a bit of a midweek challenge game.

This is no plummy game in immaculate whites with landed gentry from the shires; the players reflect the local Asian population and mine is the only white, pasty face on show today.

As more turn up, there is milling around and players embrace warmly and catch up with conversations in dialects alien to me.

One of the captains for the day is Waseem who has a fop of hair not too dissimilar to Shoaib Akhtar and photographing him later, he has a high-energy bowling action a little like the Rawalpindi Express.

Waseem asks me to mention his takeaway business in the article, Krazy Chef – not necessarily the imagery you want from the person cooking your food but I’m sure it’s excellent.

As players get accustomed to this scrawny guy with the camera, they almost visibly relax and I get chatting to a few upon which it becomes obvious that this isn’t some knockabout between a few guys who barely know how to hold a bat.

Watching a couple of blokes knock up is to realise pretty quickly that there are quite a number of decent players here.

If the small skinny dude I’m quietly eyeing drills any more straight drives with that power, he’s going to punch through the wooden advertising boards and someone driving on the road below is in for a surprise.

Personnel today is a blend of taxi drivers and those working in takeaway restaurants with the organiser of these matches, Saghir, a taxi driver in Harrogate who also runs a takeaway business. 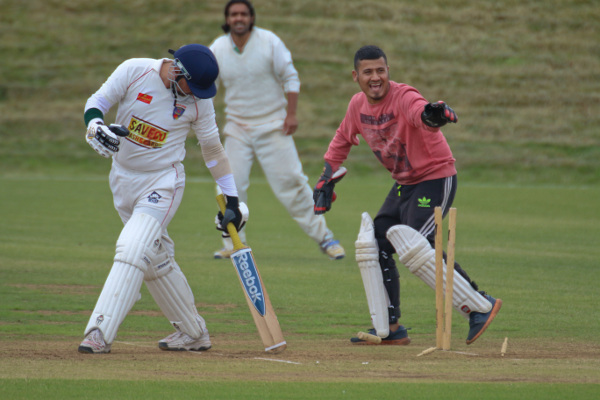 Mostly they come in whites and club jumpers but are few of the more casual, recreational players rock up in tracksuits or jeans.

Looking around, most have club kit from West Yorkshire clubs like Idle, Thackley, Bowling Old Lane, Undercliffe and as the match gets underway, it’s competitive, that’s for sure.

Nasa joins me on the boundary as I click away merrily and fielders ask for pictures of themselves catching, diving or bowling.

There is a major spectrum of cricketing ability here with two Bradford Cricket League overseas cricketers on show.

Undercliffe’s professional for 2015, Fahim Ashraf, who plays Pakistani first-class cricket, is here and Idle Cricket Club’s Viraj Hadkar – who hits 99 not out a few days later in the Bradford League, is also playing.

Perhaps in Bradford, this is a fresh spin on friendly cricket and everyone looks to be enjoying themselves.

The batsmen spend most of the time attempting to cream the ball into Manchester and bowlers tear in and hold nothing back.

Even a match involving taxi drivers and restaurant owners, which you imagine will be a gentle knockabout, is anything but.

After all, everyone has to work so why shouldn’t cabbies be demon destroyers with a cricket bat?

But those early expectations of a low-tech, doss about between mates who don’t usually play cricket has long since evaporated.

This duel is intended as the equivalent of midweek nets which, due to the nature of their jobs, makes early evening training at clubs impractical, if not impossible.

As the camera gets packed up and the trek downhill into the guts of Bradford begins, the two Bradford League stars are hunkering down and a gigantic six has just been launched into the trees.

On this showing, cricket, in all its wondrous variety and depth, is alive and kicking in Bradford… 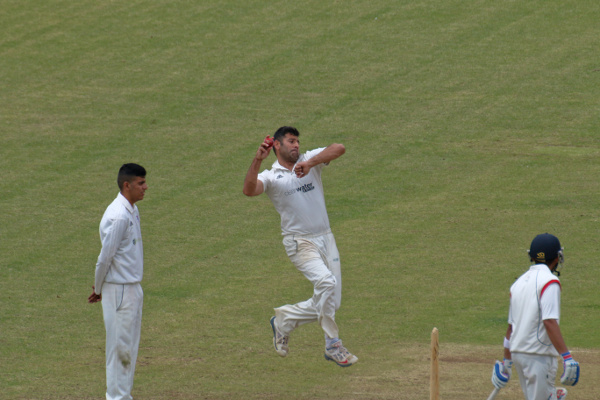 Enjoy these action shots from the game, some amazing views over Bradford – just click on the TAXI DRIVERS AND RESTAURANT OWNERS link.

You’ll be asked to plug in your email (joining our occasional mailing list is hopefully a small price to pay for quality cricket photos).

Psst: No obligation but if anyone want to buy a photo, they can do that too.