You are here: Home / Club cricket / Meet the company stealing my cricket articles 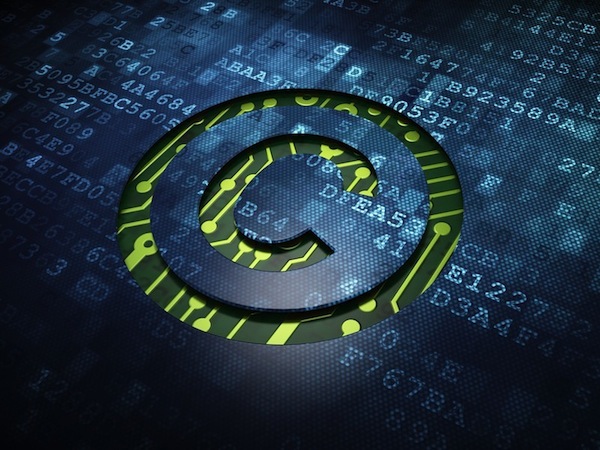 They say imitation is the sincerest form of flattery – but what about when my articles are continually being nicked, without permission, and published elsewhere?

This is a tale of technology, content marketing and a blatant disregard for copyright law.

Without question, it’s the most important article I’ve ever written.

Meet Spontly, a Newcastle-based firm that develops apps based around sports teams. On the surface, they’re reputable. They have an office, staff and have even dip into player sponsorship, such as Nathan Massey of Castleford Tigers, for whom Spontly created an official app for fans of the Yorkshire rugby league outfit.

So, you can imagine the way my jaw hit the floor when randomly plugging the headline of one of my articles into Google for reasons I now forget – and seeing another website link with the same headline. What are the chances, huh?

It transpires that the Yorkshire Fan App Twitter account, one of many Spontly creations, was hoovering up articles from all over the place and republishing them, without consent, on their own website.

As a feeble nod to my original article, they had included a tiny credit saying ‘Source’ in the bottom right. But that hadn’t stopped them taking the photo I took, article text and even the same headline.

Who would be that stupid and brazen about digital harvesting? Well, it takes all sorts and it is, as we’ll discover, a tangled web when journalism, publishing and the internet combine.

If you aren’t familiar with copyright law, here’s what I know. If you write an article or take a photograph, by way of example, you own the copyright to that. No-one can use it in any format anywhere without your permission.

Why would Spontly being contravening this? Well, they are building apps for the county cricket market and they need to grow an audience to be interested in – and presumably buy into whatever they’re selling.

Rather than create their own content, which takes time, effort and dedication, they are lifting it from elsewhere to try and get Twitter followers or Facebook fans.

This isn’t just about Cricket Yorkshire – though just the mere thought of someone else illegally profiting from my journalism will likely turn me into a slightly skinnier version of The Hulk.

No, this is happening a lot. The example I gave at the start of this article with Castleford Tigers is misleading in that this is a legitimate deal – but other apps they make aren’t official team apps, they just appear like they might be.

Muddled? Well, I imagine that’s kind of their strategy.

The apps aren’t actually the issue. Anyone is allowed to create an app and as long as it meets the criteria, upload it for consideration on iTunes and Google Play platforms.

No, it’s the pre-sales step before that, the bit where articles are scooped up without anyone being any of the wiser that really had the steam blasting out of the ears.

How can they get away with it?

That’ll mainly be because the owner of that content hasn’t noticed yet but also because unless someone has the clout, time and funds to pursue it legally then nothing will stop. But the beauty of journalism is that it can be used as a power of good (more of that later) 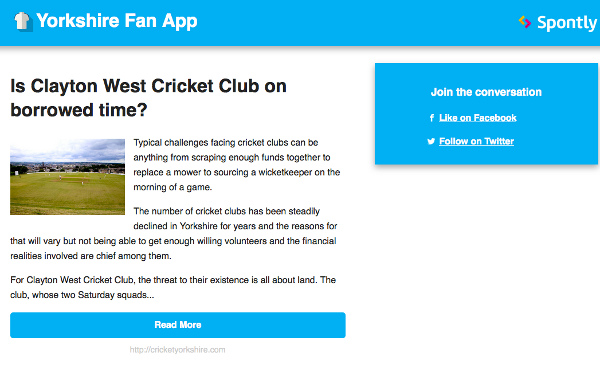 Incidentally, since I demanded Spontly take my article off, my most recent one – about West Clayon Cricket Club – is now on their site too. Except now, there’s a only portion of the article with a link to my website.

Progress of a sort but it’s still completely illegal and like stomping pop-up moles in an amusement arcade with a plastic hammer.

I informed Yorkshire County Cricket Club about the Yorkshire Fan App account and the Club moved quickly to report them to Twitter – and also paid Cricket Yorkshire a compliment too. 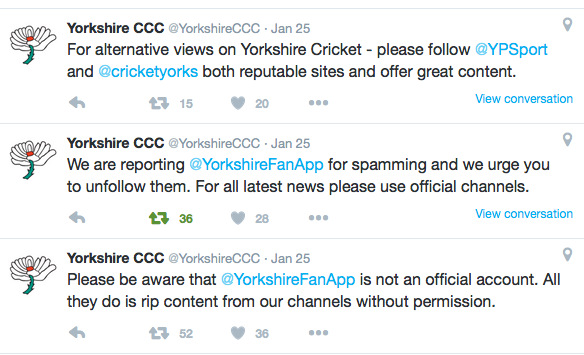 So what now? Well, it will keep happening, that’s for sure. The irony is not lost on me that this very article about Spontly breaching copyright will itself be stolen in a breach of copyright by them!

I wanted to get a respected legal opinion so I turned to Phil Gorski, of Blacks Solicitors LLP in Leeds, who kindly agreed to talk through the finer points of intellectual property law.

The edited highlights are: ‘yep, sounds like copyright breach to me’ as well as the depressing fact that this practice is rife because the cost and energy associated with chasing down rabbit holes is more than most can commit to:

The Internet makes a lot of things easier. Unfortunately, copyright infringement is one of those things both in terms of finding material and reproducing it. Some people believe that if something is made available on the Internet then copyright is no longer relevant.
That’s not the case – copyright law applies just as much online as anywhere else.”
PHIL GORSKI, SOLICITOR, BLACKS SOLICITORS.

So, there you have it in Blacks and white. See what I did there? Well, before we wrap this up, there are two final threads to this story.

I wouldn’t be doing my job as a journalist if I didn’t give Spontly a chance to defend themselves (good luck there) or at least apologise.

So I rang their offices, after promising Mrs Cricket Yorkshire I wouldn’t have one of my ‘Basil Fawlty’ moments.

Their CEO, Jim Mann (@jimmann23, if you want to reach out to him on Twitter), didn’t reply to direct message/tweets (nor did their company account) and the requests for an interview by ringing their Newcastle office went unanswered.

Frankly, they could have said anything and I wouldn’t have accepted it. “The dog ate my homework” (which was on copyright law, obviously) just won’t wash because I believe in both original journalism and hard graft.

I didn’t set up the Cricket Yorkshire website five years ago so that some day I could appear on the radar of some opportunistic, unprofessional numpties.

The practice is known as ‘content scraping.’ This is what Spontly are doing on social media – either by a simple, copy-and-paste job but I suspect via a computer algorithm, as the articles appear on their social media feeds soon after being published by the genuine author.

Last week, when I put together some of this article – rather than finishing a cricket book with a pressing deadline – I clocked Spontly were advertising for a Sports Community Engagement Intern whose role was ‘managing social media accounts’ and ‘sourcing relevant news.’ Couldn’t see scruples in the job description.

A finishing thought then around content marketing and why my predicament is easier to understand – if not accept – than you’d think, in the wider context of the shifting sands of online journalism.

But their genius is to have created their own (perfectly legal) niche where social media has become the news, which blurs the boundaries between other people’s content and legitimate publishing.

Of course, the tactic of content scraping described earlier is not inventive marketing like that. It’s just wrong both legally and morally – I hope, as a result of this, the social media audiences for Spontly evaporates.

Well, I hope you’ll connect up with Cricket Yorkshire on social media, if you don’t already. Just follow @cricketyorks on Twitter and ‘like’ the Cricket Yorkshire Facebook page – and do give your own views on the subject of this article.

**If you believe original content you can only read online here requires a staunch back-foot defence (showing maker’s name, obviously), here’s what you can do: