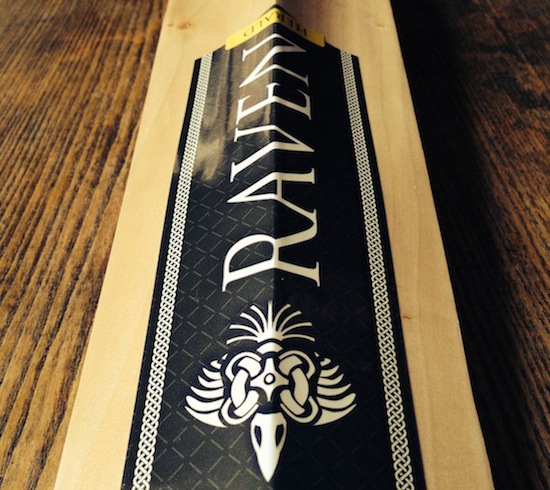 Our interview with Carl Marsden, owner of new Pocklington-based bat brand, Raven Cricket, took place some time back in a Leeds café. Launching a new company, as I know myself, is a tough ask and the inspiration for diving into the world of batmaking was one I was keen to get to the bottom of.

Carl captains the second team at Yapham who are in the HPH York Vale League and it was his experience as a coach of seeing juniors with well-known bat brands that weren’t fit for purpose that started the ball rolling:

“The amount of them which were turning up and breaking. The stickers were there, they looked like the bats that the pros were using but they were nowhere near it.”

Geography also came into it. York and the surrounding areas play host to an immense amount of cricket but yet there was no local brand servicing them. Nick Nixon podshaving merrily away over in his barn in Malton is probably being the nearest.

You might have thought that York was a sports retail hub when it comes to cricket but physical shops have completely died out. Caring about the local community and canny marketing are both worth shouting about so Raven Cricket will sponsor the York Vale League’s Young Player of the Year award and their junior six-a-side tournament, which is due to be staged at Pocklington on Sunday June 29.

We briefly discuss Carl’s own abilities with the bat – it doesn’t follow that you need to be the next Tendulkar to produce absolutely supreme bats but a batsmaker’s own relationship with the game also intrigues many:

“I’ve played everywhere from number one to eleven for Yapham and bowl off-spin, first-change.”

In terms of expectations for the 2014 season, predictions in the Marsden household are dosed with realism. When I light-heartedly suggest a thousand runs, he re-calculates that to perhaps ‘a quarter of a thousand…’

I can’t help but wonder what the local York area is like for taking spin but apparently pretty good – especially at Yapham. The grass can be a bit long, Carl says – revealing his trump card with a smile.

Raven Cricket have kept things simple with three types of bat. The Talon – which featured in our cricket bat test (results out soon) – is an elegant traditional shape. The ‘Broadside meanwhile has bigger edges, concave profile and middling sweet-spot while the final bat is called the Herald which has chunky edges and a light-pickup.

All of Carl’s bats are available in whatever grade of willow you want from grade 4 to ‘elite’ which is the best grade 1 wood out there. Which leads us neatly onto the issue of willow grades and how obsessed or unfussed the average cricketer is with grades of wood?

“I suppose looking at them, you wouldn’t know…I think it’s more expectation, if you pick up a bat that says ‘grade one’ then there’s just an expectation that it’s going to be a better bat than say grade three at half the price.”

To Carl’s credit, he is honest enough to acknowledge that with one blind mallet test he did, the grade four was as impressive as grade two but perhaps with less aesthetic appeal.

According to ‘Mr Raven Cricket’ as I introduce him as – the ultimate test is also the simplest – to pick it up and get used to it in the hands: “I was always think that with a bat, if you pick it up and it feels right then you’re away. It’s confidence in knowing that the bat you’re holding is comfortable for you.”

He goes on to add: “If you’ve got to think about the bat in your hand…if it doesn’t feel right then when the bowler’s running in, you’re at a disadvantage immediately.”

We move on to chat about the design of his Raven Cricket brand, which can be the turbo-charge or death-knell of a new bat that comes to market. Raven Cricket has an unashamedly Viking look to its entire range and here’s why:

The Viking affinity with York on the doorstep is a smart move and mirrors that of Yorkshire County Cricket Club who rebranded their one-day identity in 2014 as the Yorkshire Vikings.

“Logos are massive in business, you want something that is instantly recognisable. The vast majority of people who look at our bats on the website say, ‘I love your logo’ so that’s a great start. I didn’t want anything too complicated so we’ve gone with quite a classic design.”

We end the interview with a look to the future and what might be for Raven Cricket. In the next three or so years, the goal is for Carl to be making all the bats himself – which is something he’ll be learning over the next few years.

It’s been a thoughtful hour talking cricket. Carl’s a quietly-spoken guy who talks a lot of sense and I wish him all the best with his immediate goals for Raven Cricket: “As for the local area, I’d like to be the brand that clubs and players go to.”

He sent a bat to New Zealand in the spring so word is spreading organically month by month – and you can find out what Cricket Yorkshire made of his Elite-grade Talon bat in our Yorkshire Bat Test which will be on this site soon.

Buying local and/or from what might be termed niche brands can be a more personalised buying experience than picking a bat that’s been churned out in India by the thousand off a shop shelf, taking a few half-hearted swings and then making quite a rushed purchasing decision.

As it happens, there’s definitely room for both (particularly if you get sound advice from a retailer) but support these batmakers and up-and-coming brands too and they’ll look after you. The prices Raven Cricket offer for even their top-end products (around £260) are some way lower than many offering grade one blades and we kick around the issue of price on the audio interview if you want to listen but it’s an affordable alternative to bigger names on planet cricket bat.

Remember the name Raven Cricket, hopefully exciting things to come from Carl and his bats in the coming years and I’m all for more choice here in Yorkshire and further afield around the UK.

To listen to the full audio interview on Raven Cricket and batmaking, click the orange ‘Play’ button below and away you go.