You are here: Home / Club cricket / Is there a future for cricket club programmes? 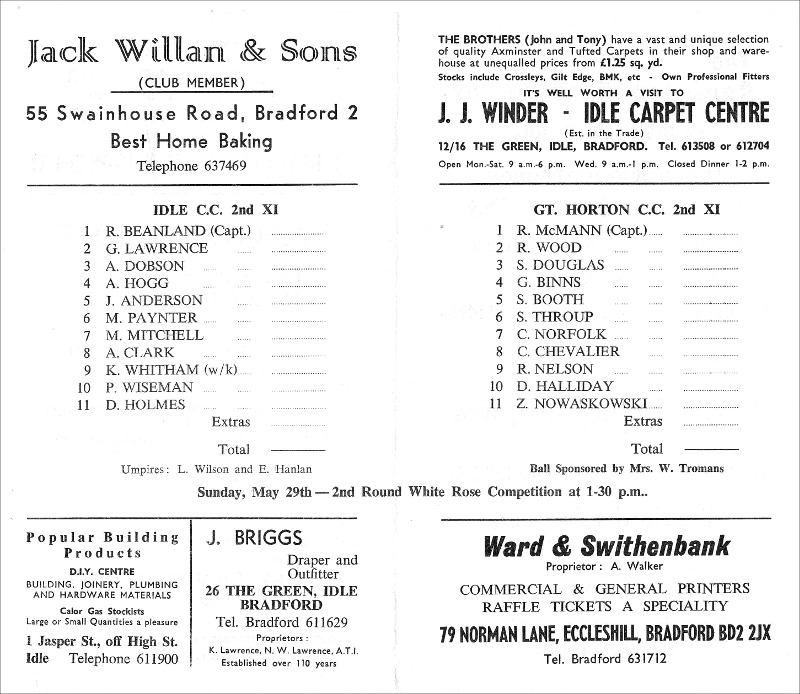 A strange realisation gripped me the other day. I was writing Christmas cards while troughing a door wedge of chocolate yule log and it became apparent that I have forgotten how to write.

When was the last time you picked up a pen and actually wrote anything as opposed to fired up the keyboard and danced your fingers over a keyboard?

I find that I start a word and then halfway through it becomes a squiggle, almost as if my fingers have lost the muscle memory associated with forming coherent words.

As I was coming to terms with being a writer who can’t write (don’t tell my book publisher), I got to think about forms of writing that exist offline, away from Google, and my day-dreaming brought me eventually to the world of cricket club programmes.

I have seen a fair few on my travels around Yorkshire’s cricket clubs as you might imagine. They feel like an invaluable but tenuous form of publishing, belonging to another era that might well be under threat.

In Yorkshire, cricket programmes are still very much in evidence but you’ll tend to find many clubs have long since packed in the effort of compiling content and getting it printed. Cup finals or special occasions tend to warrant it and it varies as to which volunteer believes it’s worthwhile and has the means to keep it going.

As far as I can tell, league cricket Handbooks are very much alive and well and while these are compendiums painstakingly compiled and worthy publications in their own right, the weekly club programme reflects the rollercoaster of a season and the players that are being selected.

I thought I’d explore how clubs in a particular league approach this so I asked Reg Nelson, league ground-hopper and historian of the Bradford Premier League, to pen a few words. Over to Reg…. 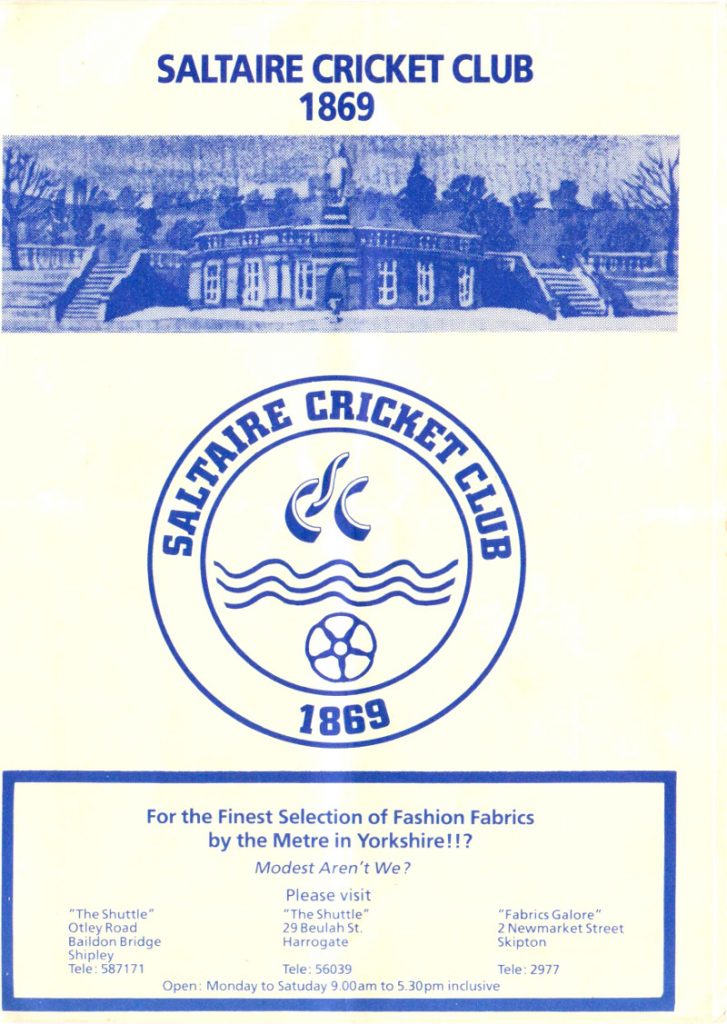 Time was when a match programme or team-sheet was hardly seen in local league cricket, and even when it was, it invariably consisted of one folded sheet with the teams in the middle.

Sometimes it came in a more sturdy form of card which probably illustrated a slightly richer club. Either way, it was surrounded by advertisements from the local butcher, pub or green grocer paying no more than a few ‘bob’.

Of course in those days it was a different world with prohibitive printing costs even for the most mundane item. Big matches like Priestley Cup Finals, Representative games and title clinchers only ran to a score sheet.

The advent of affordable personnel computers and good printers in the Nineties heralded a new era for the modest programme. Clubs saw this as a great way to increase sponsorship by giving clients a full colour page for their advertisements.

The club could also boost their profile and push their money making schemes, whether it be 100-clubs or Sponsored walks. It also gave them an opportunity to be more creative with their writing, featuring player’s pen pictures, match reports and a welcome page for the opposition.

When I was involved with Saltaire Cricket Club, we decided to `push the boat out’ in the Nineties, and instead of having permanent features in the programme, wrote six unique articles per edition. 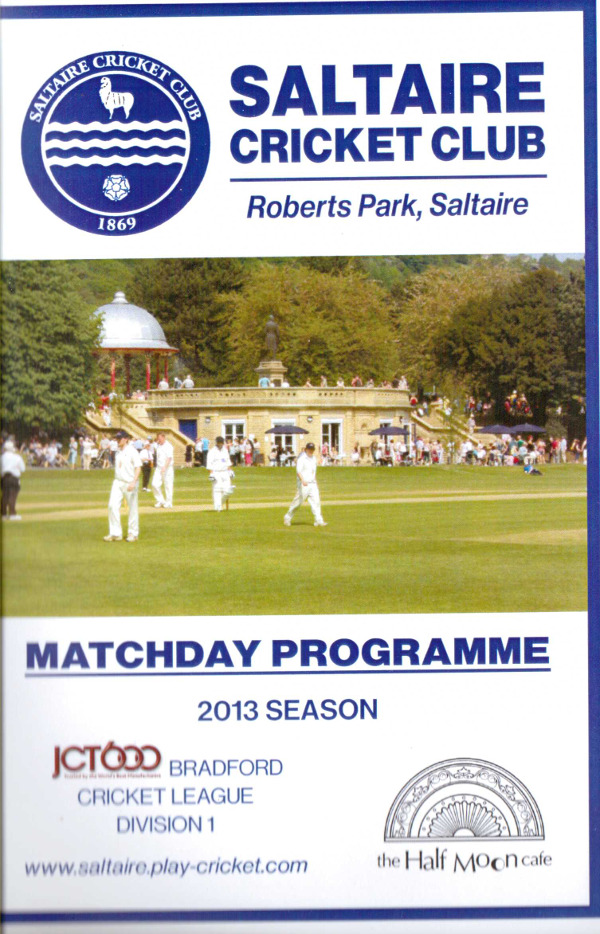 It was a programme to be proud of and assisted greatly with our sponsorship deals. Opposition players liked to read about themselves, and the spectators helped to make it a talking point on the day. It would be no exaggeration to claim it as the best programme in the league at the time.

In retrospect, it was probably overkill, but it increased the value of the entrance money for those that liked to grumble about paying, and it gave the club a higher profile. I was tasked with the writing of the Saltaire programme, and my enthusiasm for facts and figures of the opposition often lead me into deep water.

I remember well the time that a record-breaking Yorkshire League batsman had a lean spell in his debut season in the Bradford League. I listed out his single figure scores along a long line of modest scores to illustrate his struggles, and thought nothing of it. At the tea interval, the batsman in question approached me with the programme in his hand and pointed out my article.

Expecting a sharp word or two, he willingly agreed with my appraisal and shook my hand. What a gent!

Another time I did pen pictures of the opposition players and couldn’t find any words to describe a very ordinary player. In desperation I labelled him a ‘journeyman’ (which he definitely was) and it got back to me from the Saltaire players that he was none too pleased. One player who gave out jibes and could also take them was the much-travelled Mark Gilliver.

I did a little bio on him and labelled the piece `Have Boots Will Travel’ aimed at the fantastic number of clubs he had played at. He literally laughed it off, whereas some could have thought I was inferring a mercenary.

One article I wrote in the early Noughties concerned the sneaky ways certain individuals turned up to watch a match and went to great lengths to avoid paying. I focussed on a certain individual who would `promenade’ in the park before sneaking between the trees on the banking to take his free seat.

On the day of this article the individual did the self same thing and rather than have the usual debate with him about not having any money on him, I thrust a programme in his hand. Whether such people would take heed of such an article we never did find out.

Farsley CC has an excellent writer using the pseudonym of ‘Boundary Edger’, reviewing in intricate detail the previous week’s match. He sets the scene well and is unafraid to castigate his own team on occasion.

Stuart Tordoff does similar with the Woodlands programme, adding a gentle humour backed by offbeat pictures of happenings on a cricketing Saturday afternoon.

I’ve noticed that there is a greater consistency in the quality of programmes in the Bradford Premier League these days. One can argue that this is a hallmark of being professional and keeping up the standards. Others could argue that an accurate team sheet is all that one needs to enjoy a game of cricket.

Editor’s note: Thanks to Reg for his thoughts from the Bradford League. Amid all the hours of staring at screens and scrolling, there is still a place for the humble cricket programme but if we don’t buy them, they’ll bite the dust. 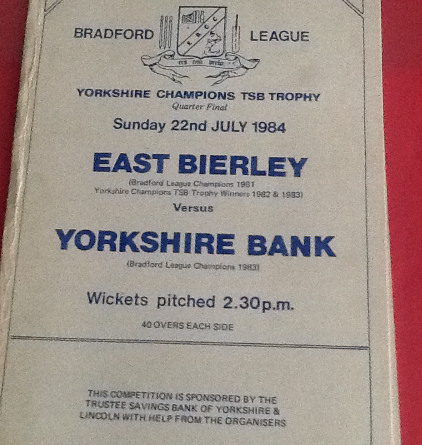 WHAT DO YOU THINK? DOES YOUR CLUB OR LEAGUE DO A STELLAR PROGRAMME?

Share pictures of your club programme on the Cricket Yorkshire Facebook page or tweet us at @cricketyorks. It’s a chance to give a mention of club stalwarts who do club or league programmes or Yearbooks.

Looking forward to visiting more clubs around Yorkshire in 2019!