You are here: Home / Cricket Features / Ditching the coin toss and don’t say balls to pink 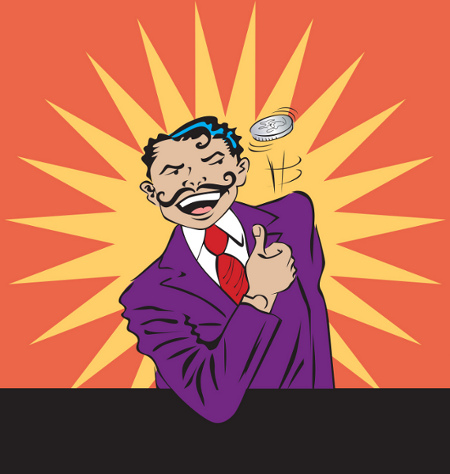 Plans to scrap the coin toss in Division Two of the LV=County Championship next season has sent seismic, shuddering shock waves through the global game.

The idea is to…wait for this decisive, bold and innovative step into the unknown…trial it for a year in 2016 to see what happens.

It has yet to be rubberstamped, you understand, such enshrined traditionalism must be massaged and cogitated before being jettisoned but they might introduce this.

But the sacred toss will remain in Division One and one-day cricket, just in case you thought the world was about to fragment as a direct cause of such flagrant, cricketing impropriety.

Still, it’s not all maverick manouvering…the away team will be able to choose whether to bat or bowl, but they could also ask for a coin toss if they weren’t sure.

How does anything ever get decided in county cricket?

The England and Wales Cricket Board (ECB) believe that the coin toss has had a decisive role in the outcome of matches. No, after you…no, really, you choose….

Will removing currency rotations actually prevent clubs doctoring their pitches to suit their own players?

It just goes to show that professional cricket continues to wheeze and cough as it tries to maintain pace with the recreational game.

Twenty20 had been played by pub teams across the land for years before the pros came along, looking like walking advertising boards in coloured polyester.

Last Man Stands, the T20 hybrid for grassroots cricketers and a wonderful advert for fast-paced, limited-overs cricket, has no coin toss. It’s buried in the rules but I’ve never actually witnessed one.

It is about getting on with the game and stripping away some of the Olympic faffing about that cricket does better than anyone else.

As for county cricket, it needs to evolve and far quicker than a coin toss…

You will read a lot about pink balls over the coming weeks. Some will mutter ‘balls to pink’ while others will wonder what all the fuss is about.

A cricketing missile the shade of the Pink Panther’s cheeks is being used in the first day-night Test match ever with New Zealand the visitors to the Adelaide Oval.

A penny for Fred Trueman’s thoughts on bowling with a Kookaburra any shade of rose other than white would be priceless about now.

For the record, Cricket Yorkshire’s views on floodlit Test matches are crystal clear. Give it a go before castigating it as doomed to fail. If they did it tomorrow in Yorkshire, I’d be there with my flask of Yorkshire Tea and foggy breath like a shot.

It stays warmer at night in Adelaide in November than it does during the day at Headingley for, well, most of the year, so don’t expect this to be rolled out, lock-stock, across the world overnight.

Yet, the main concerns lingering concern the quality of the Kookaburra pink ball; whether it can be seen and how it performs under floodlights.

This, to bring things full circle, could be where the coin toss becomes crucial as chasing while the ball hoops round corners can be a hiding to nothing.

But, but, but…please, let’s not crush this embryonic debut too prematurely.

Day-night cricket is an innovation to be embraced and unless the pink ball ends up being totally invisible to spectators, officials and players, here’s to a brave new world…