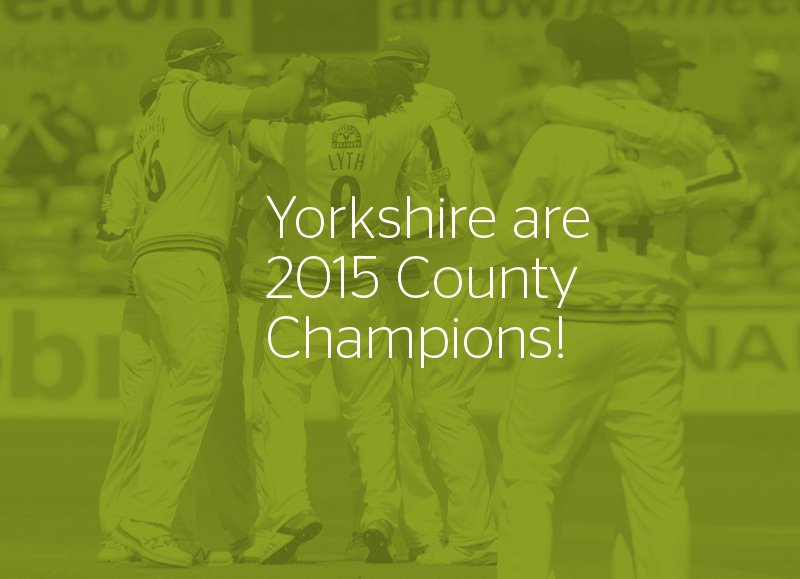 With Yorkshire CCC beginning the day needing five Championship points to retain the four-day title, you didn’t want to be late to your seat at Lord’s.

With an earlier 10.30am start now we’ve hunkered into September, Ryan Sidebottom began things sedately with a triple maiden over from the first six balls of the match.

The trademark finger pointed skywards before peeling off to receive the high fives, back slaps and smiles from tea mates. Yorkshire were up and running.

With the mother of all statements of intent, the visitors had secured their first bowling point after just six balls against their nearest contenders.

By the time the players were tucking into the famous Lord’s lunch, Middlesex were reeling on 92-7. They were bundled out for 106 with minimal fuss and Yorkshire set off, in reply, like the clappers.

In the Cricket Yorkshire office, it was frankly impossible to concentrate on anything else. Twitter and various live county scorecards were littered across Firefox browser tabs as the game between Nottinghamshire and Durham came into play.

There is more than a kernel of truth in that as Andrew Gale’s team have looked irrepressible, despite the regular absences of key personnel for England duties.

That Andrew Gale fell two short of a precious Lord’s hundred took a shade of gloss off an otherwise historic and extraordinary day; his dismissal the first batsman not to be out LBW after five leg-before wicket decisions.

Jack Leaning’s season – and let’s not forget there are two Championship matches left (Hampshire away then Sussex at home) – has yielded 794 runs, a strong return, while Gale (763) and Lees (662) have both contributed.

The firebrand quartet of Yorkshire bowlers have proved the bane of batsmen up and down the country this summer in Championship cricket.

James Middlebrook’s contract prompted some raised eyebrows but the thirty-eight year old spinner has proved a canny acquisition with twelve wickets for spit by the time the first day of this Championship came to an end.

You tend to forget all those months ago that six of Yorkshire’s squad were picked for England’s tour to the West Indies and Jason Gillespie has had to reshuffle his team accordingly but strength in depth has won out.

Given the controversy surrounding Andrew Gale last autumn, the captain of Yorkshire will take a moment to relish lifting the golden trophy at the conclusion of this Lord’s fixture.

Even in his wildest dreams, he can’t have imagined it would have been achieved again the next year even more emphatically.

On the England and Wales Cricket Board (ECB) website, Martyn Moxon had this to say on the feat:

“To have provided so many players to England and still won the Championship with two and a half games left I think is a remarkable achievement.” Martyn Moxon, Director of Cricket, Yorkshire CCC.

With a sponsor’s evening earmarked for the night after clinching the Championship, you’d forgive Yorkshire for being a little fuzzy tomorrow but there has been talk of wanting to snatch a record points haul (Sussex managed 257 in 2003) and going unbeaten so the hard partying may need to be on hold.

Congratulations to the county and all the players and staff who have contributed to an astonishing effort by retaining the LV=County Championship; the first time the county have done so since 1968. Yorkshire are the County Champions for 2015 and remain the county setting the standard in four-day cricket.