You are here: Home / Yorkshire CCC / Alex Wharf on making the grade as international umpire

On learning that former Yorkshire all-rounder Alex Wharf had been appointed to the Emirates International Panel of ICC Umpires for 2018, I got on the phone to have a blether.

Wharf came up through Yorkshire Academy but the right-arm medium-fast bowler moved to Nottinghamshire in 1997 after being unable to cement a spot at Headingley.

Alex is the step-son of Derek Wharf who had ties with Buttershaw St Paul’s Cricket Club on St Paul’s Avenue within the urban sprawl of Bradford and Wharf junior worked his way up through the juniors to represent the senior side in the early Nineties.

Undercliffe Cricket Club’s craggy destination was home next for a Bradford League promotion campaign in 1993 that yielded 383 runs and 36 wickets. It was to be an alluring status as nippy pace bowler who could wallop the ball menacingly in the middle-late order that would ultimately see him represent his country. 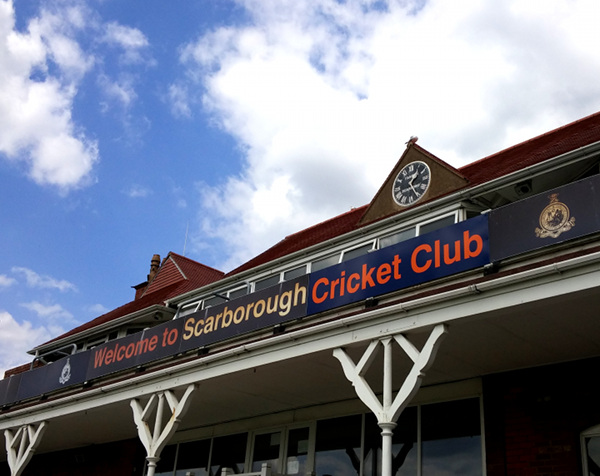 Wharf’s spell at the White Rose county might have been brief (seven appearances) but he made his first-class debut in 1994 at Scarborough Cricket Club and claimed the wicket of Brian Lara only a couple of months after the West Indies international had racked up 501 not out against Durham.

An observer who was in the crowd that day told me that Lara clattered him for five successive boundaries before nicking off to a shorter, wider delivery and storming off, refusing to sign autographs. For his part, due to the quirks of scheduling, Wharf has never been back to North Marine Road since – but what a first wicket, eh?

If you can judge temperament purely on intonation of voice, you get the impression Alex takes life in his stride – but he had a habit of sensational debuts.

The 42 year-old from Bradford played 13 One-Day International games for England (2004-5) and in his first, accounted for Sourav Ganguly, VVS Laxman and Rahul Dravid (19,150 runs collectively at the time).

It was on England’s 2004/5 tour to Zimbabwe that the kernel for an umpiring career took hold after nattering to the umpires at pre-match nets.

Global travel and maintaining a connection with the game from the best seat of the house began to appeal more and more, as his playing career tapered out after a knee injury refused to settle:

“We got chatting and that ignited a bit of a spark in what I wanted to pursue after I finished playing. It’s been a very enjoyable career move for me…you’re forever growing and learning.”

He adds that the hardest thing as a professional umpire has been becoming adaptable and embracing the regulations and technology changes that continually keep umpires on their toes.

But, what’s he most looking forward to in the cricketing year ahead?

After all, the promotion to rank of international cricket umpire brings with it further chances for self-development:

“Just testing myself really…testing my own abilities…ideally, I’d like to make it to the Elite Panel.”

We get to talking of mentors and for Alex, he’s reluctant to single someone out, admitting to being a sponge when it came to taking in tips and tricks from those in white coats around the circuit:

“Every umpire I’ve ever come across has had a massive amount of knowledge and each one of them has helped in my own progress. We’re a tight fraternity…we’re always discussing things and I’ve got an open ear!”

Wharf’s umpiring journey has seen him earn his stripes in county cricket as well as standing in women’s internationals, England Lions fixtures as well as North-South series last year in Abu Dhabi.

He is the fourth English umpire on that ICC list, joining Rob Bailey, Michael Gough and Tim Robinson – while Ian Gould, Richard Illingworth, Richard Kettleborough and Nigel Llong are on the Elite Panel.