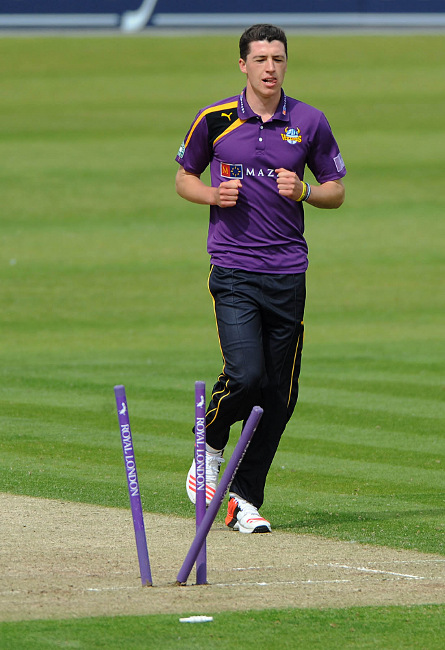 Yorkshire County Cricket Club’s vaunted pace bowling reserves have been so plagued by injuries this season, they must being doing stone-paper-scissors for stints on the physio table.

Matthew Fisher, Tim Bresnan, Ryan Sidebottom, Jack Brooks and David Willey have all had weeks out of action and it’s a testament to the strength of the county that they’ve been able to forge ahead – more successfully in Championship cricket, I grant you. 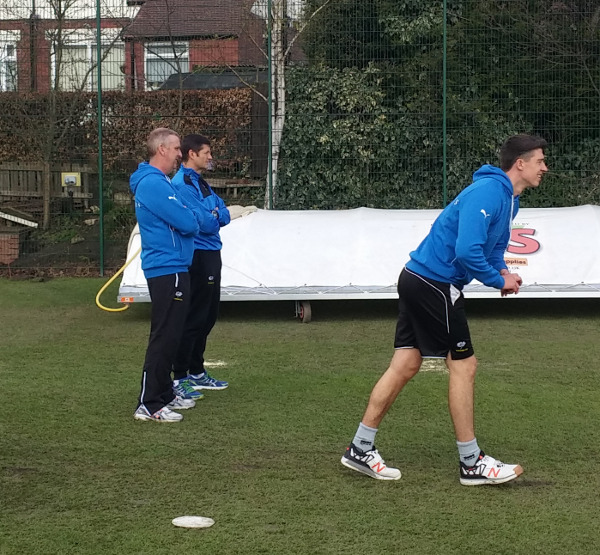 If we re-wind to Yorkshire County Cricket Club’s media day, Matthew Fisher was bowling in the nets and though his teammates reckoned he was at 70% having damaged his hamstring, that looked plenty rapid enough as the ball spat like a disgruntled cobra.

The eighteen-year-old fast bowler, who became the youngest post-war county cricket back in June 2013, has understandably got coaches, fans and fellow pros excited at his potential but right now, he’s having to bide his time and let his body heal.

Fisher’s left hamstring initially tightened on the pre-season tour to the UAE and he was rested as a precaution but when we catch up for this interview, he has recently suffered another relapse.

First, there was an issue after bowling in a second-team match down at Bristol in April but much more recently, Matthew played as a batsman for Yorkshire Academy and felt it grumble after turning for a second run.

There is currently no timetable for his comeback – sometimes for all the medical acumen and science, it’s a case of rest, wait and see – though the player and county will have crossed digits for weeks not months:

“We’ve just been told to rest it for a couple of weeks, get my exams finished and then we can concentrate on getting back fit. I’ve been thinking about my left hamstring for about three months and I just want to focus on my exams!”

You can so easily forget that Yorkshire’s premier strike bowler in last year’s NatWest T20 Blast (16 wickets) is still at school doing his A-levels.

Blending the normality of education with life as a professional cricketer needs a level head and for Fisher, the absence of cricket has made it doubly frustrating: “For me, I quite like something to take my mind off stuff…I like the cricket to get away from the stress of the exams…”

It takes a certain temperament to classify opening the bowling for your county in a sold-out Roses T20 at Headingley as R&R and you have to admire it.

We move on to discuss Yorkshire’s stuttering T20 campaign this season where they had yet to win a game before Old Trafford and have come in for some almighty flak from disgruntled fans on social media.

Yorkshire CCC First XI Coach Jason Gillespie was quick to retaliate when there was one misguided tweet with the accusation that his squad simply weren’t trying.

Fisher admits to seeing the comments on Twitter and agrees with my own assessment that some are ‘a bit harsh’ but goes on to say he also fully appreciates the expectations from paying fans:

“Playing for Yorkshire and the way we’ve been over the last three years, I can understand why they (fans) are getting frustrated. We’ve got a new captain in Leesy (Alex Lees) and he’s got to have time to settle in…we’ve been making these excuses for the last three years but it’s tough to put your finger on it really…if we had an answer, we’d be fixing it!”

There seems little doubt that Yorkshire have the talent in the squad to succeed at limited-over cricket but finesse and composure with the bowling particularly has let them down at crucial moments.

Fans have questioned the wisdom of signing an overseas player (Kane Williamson) who has only recently arrived with the T20 Blast well underway.

Clearly, the plan was to notch up a few victories before the world-class New Zealander arrived in Yorkshire but cricket does like to hurl a spanner in the works.

The injuries to key seamers isn’t an excuse but it is a mitigating factor with Ben Coad (above) and James Wainman getting their chance but the crash-bang-wallop of T20 is an uncompromising stage to learn on and they’ve been expensive with the ball.

I wondered what Fisher thought of the critical response to including Wainman and Coad who deserve their chance and can’t exactly prove themselves from the safety of the nets?

“I think for a young player coming in this year like Coady and Wainers…it was similar to me last year and I got that experience throughout the campaign and played thirteen games. It’s hard on them…they’re learning but we’re expected to be winning.”

My own take on this is that the county has a squad for a reason and won’t win anything if they flog the same eleven players until they’re on their knees and held together with sticking plaster.

The interview turns to club cricket matters with the teenager having a long association with Sheriff Hutton Bridge who play in the new ECB Yorkshire Premier League North.

With his two older brothers Mark and Adam playing league cricket, Matthew’s cricket education began with the usual sibling rivalry “testing each other out and having a bit of a battle between each other with pretend Test matches.”

Fisher can’t speak highly enough of his home club, a loyalty you’d expect and see mirrored across the land and yet it’s notable that a young county cricketer hasn’t forgotten his roots and how club cricket played its part:

“At the Bridge, it’s just volunteers…they’re absolutely brilliant, they’ve done it for a lot of years now and it’s a family environment…all the players come to win…”

Sheriff Hutton Bridge are expected to challenge the likes of Harrogate, Hull, Yorkshire Academy and York for the Premier League title but are already celebrating after being awarded a Sport England ‘Inspired Facilities’ grant of £75,000 that will go towards creating a modernised clubhouse.

Knowing how long the process for these big-money grants can take and the work needed over years, it’s a credit to everyone involved and I know the club wants to put their thanks on record to all the volunteers and bid managers Howard and Liz Lewis.

As an example of the club’s appeal, Matthew highlights his brother Adam who’s in the RAF in Cheltenham and comes back every weekend to play cricket. Google tells me that is 194 miles via the M1 – presumably a bit quicker if you have access to a Harrier Jump Jet but full marks for commitment either way.

Speed must be in the genes of the Fisher family – Mark won last year’s Top Gun competition, run by the Yorkshire Cricket Foundation, to unearth the fastest bowler in Yorkshire with 77mph.

I wondered when Matthew first knew he had wheels, gas, mph, clicks, revs, turbo thrusters….call it what you will?

For a young lad who has perpetually been competing against older cricketers to test himself (he was in England U19s at 15), it turns out it was at a junior under 14s tournament down in Taunton where the penny dropped:

“I bowled quick that week and the groundsman at the Taunton festival said he’s never seen anyone get the pace and bounce that I had and from there Tony Pickering got me into Yorkshire Academy. That was the first week I thought, ‘wow I’m actually quite quick!’”

Now surrounded by fast bowlers like Liam Plunkett who can also hurl down thunderbolts at a rate of knots, Fisher is not falling into the trap of being speed-obsessed:

“I never go out and go ‘I’m going to bowl as fast as I can,’ it’s more about rhythm for me and if it comes out right then it’ll come out quick.”

This summer, it’s the final straight with his psychology and PE A-Levels at Easingwold School almost done and dusted then he can get fit, stick back on the bowling boots and return to competitive action with Yorkshire.

His county needs him out in the middle and firing despite the welcome boost of a Royal London One-Day Cup win at Scarborough to open Yorkshire’s account in the competition.

Fisher’s return won’t be rushed but I’m sure you’ll join me in wishing him a speedy return in every sense and getting back to terrorising county opposition before too long.